Imagine you’re enjoying a relaxing weekend in a quaint Midwestern town that prides itself on keeping with traditions. It’s hard to get to because it’s an island in the middle of the straits separating Lake Michigan and Lake Huron, and motorized vehicles have been banned since 1898. To you, this means the kind of peace that only comes from largely being cut off from the outside world. You’re watching passersby from your rocking chair on a porch in front of one of the countless fudge stores, while hills and forests create a backdrop for the string of quaint shops immediately in front of you. At the very moment you’re about to bite into a freshly procured chunk of homemade fudge, your nose is met with a potent whiff of…

Such is the case on Mackinac Island in Michigan. Instead of getting around the island in vehicles, people can walk, bike or hop into one of the many horse-drawn buggies. Unfortunately, the horses pulling those buggies let fly with their bodily functions all over the streets. And the waste remains in the street until one of the workers performs a sweep.

OK, take a look at this horse team and buggy. Seems nice, right? Seems like a great way to get around a vehicle-free island. Awwww, horsies. Pffft. 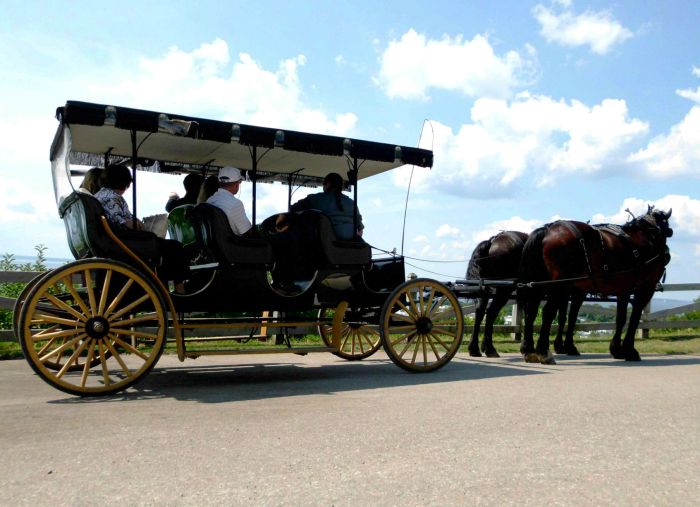 Oh, looky here, another horse-drawn carriage! How quaint! I hate to burst your bubble, but those streaks on the road aren’t from cars screeching to a halt, folks. Also, note there is one thing missing from the photo… 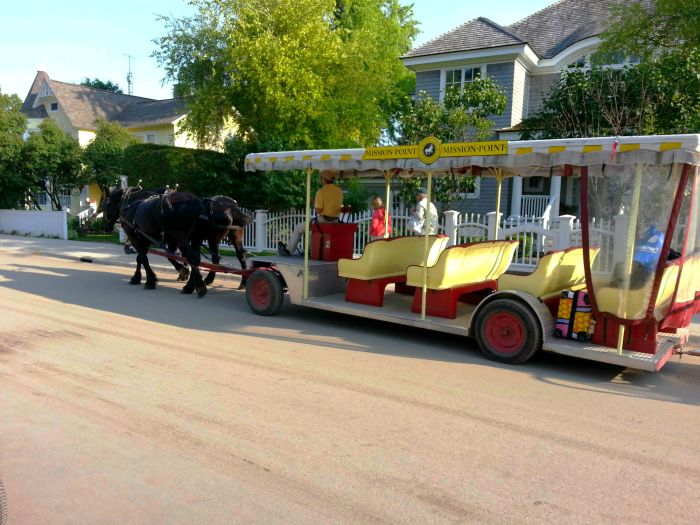 What’s missing is a poop bag under each horse’s butt. I don’t understand why those in charge of preserving the island’s history believe it’s not possible to keep the charm AND improve the island’s scent. Would it be so out of line to put little waste collection bags on the back end of the horses like, oh say, everywhere else that has buggies or horse police?? If Chicago, New York and Paris can keep the buggies’ charm while preventing piles of poop from growing in the streets, so can Mackinac.

Despite the unpleasant smell (especially during the heat of summer), Mackinac Island really does have a lot to offer. Remember how I mentioned no vehicles are allowed on the island? Well, your journey begins by parking your car at a dock in Mackinaw City where one of the three ferry operators will take you across to the island. I took the long, 45 minute ferry, but the one below is the 20 minute fast ferry. 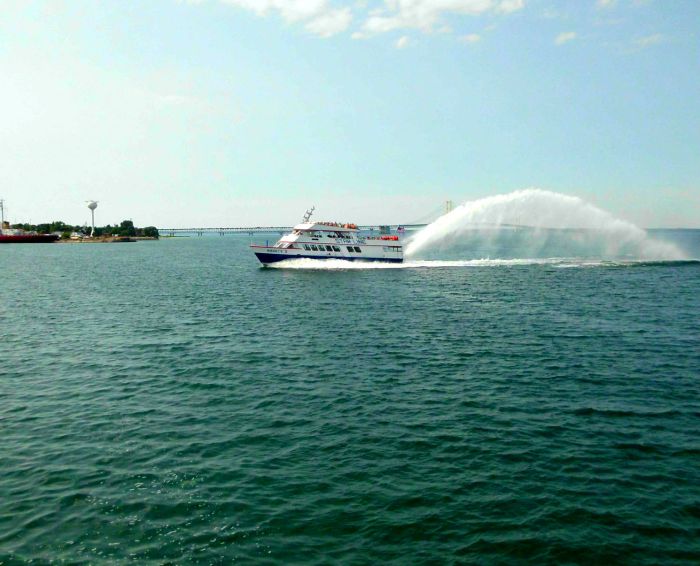 Excitement builds as you grow closer and see the boats lining the harbor and the beautiful historic buildings in the background. 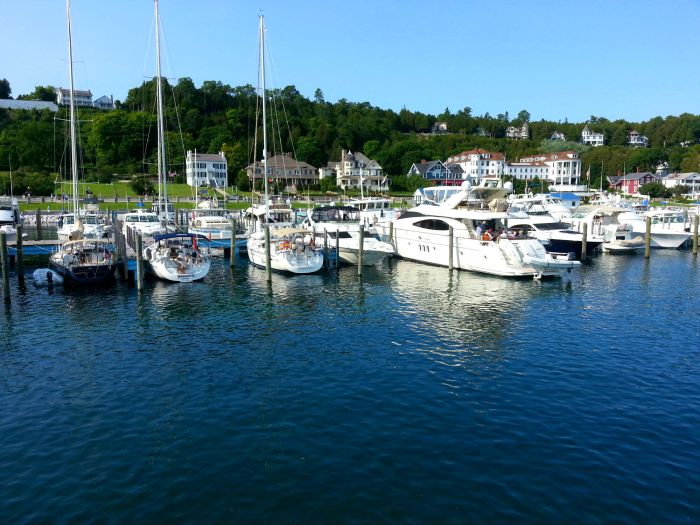 Sure, there are shops and fudge, but my favorite parts of the island are the natural and historical elements. Hiking up the hillside to look down on the rest of the island truly is worth the blood, sweat and tears. (Blood from a branch scratch on the leg. Sweat from hiking up a hillside, duh. Tears from starving after three hours and wanting the damn fish taco I was promised and never received.)

The lack of crowds on the hiking trails leading up the hill to Fort Mackinac makes the nature walk even more appealing.

There were crowds at Arch Rock, but it’s still worth seeing. The limestone natural bridge formed during the Wisconsin glaciation. Read: a long, long, long time ago. 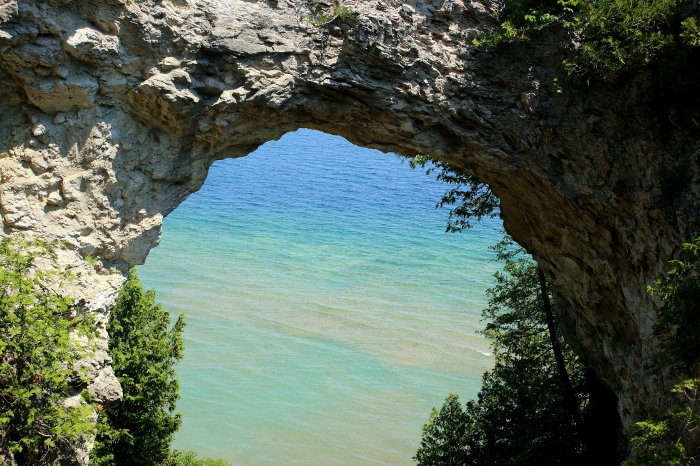 This may sound odd, but I really enjoy a good cemetery. I’m fascinated by wandering through the gravestones, inspecting the names and dates and wondering what these people’s lives were like. The nature walk turned up two fantastic cemeteries of note. Here, the Fort Mackinac Post Cemetery, where the earliest burials are believed to date back to the 1820s. And yes, the island did indeed see a lot of military action back in the day, hence the need for a military cemetery. 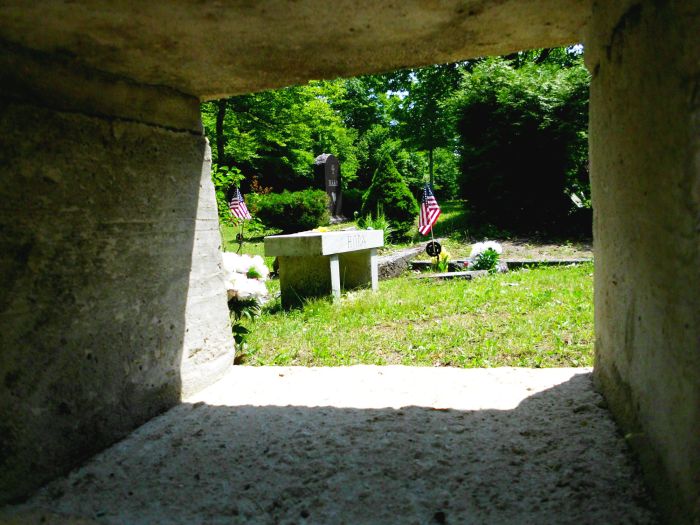 Mackinac Island holds fond memories for me, both the time I went with my family as a teenager and this most recent trip with friends. I just wish I could get the memory of the poop smell to fade.