Abu Dhabi. When you hear the word you might think desert. Or maybe you have no mental picture because it’s such an obscure destination for most Americans. I challenge you to think “architecture” when you hear the name. You’ve heard the saying “you can’t teach an old dog new tricks,” but I believe the Emiratis effectively have managed to do so in finding ways to blend glamorous newly constructed buildings with the historical and cultural edifices.

Similar to its larger, glitzier cousin Dubai, new and intricately designed towers continue shooting up throughout Abu Dhabi. The ever-changing skyline glistens with reflective glass and modern, eye-catching shapes. It really is a treat to observe for someone like myself who grumbles that every new building to go up in the D.C. area where I live is “cookie cutter” and unoriginal. I’d love for some of the architects who are helping transform the UAE into a cosmopolitan destination to bring more creatively designed structures to the U.S.

The city really only started gaining modern structures within the past 50 years or so. Looking at the skyline, it’s often obvious which skyscrapers are brand spanking new, and which are the older high-rises. 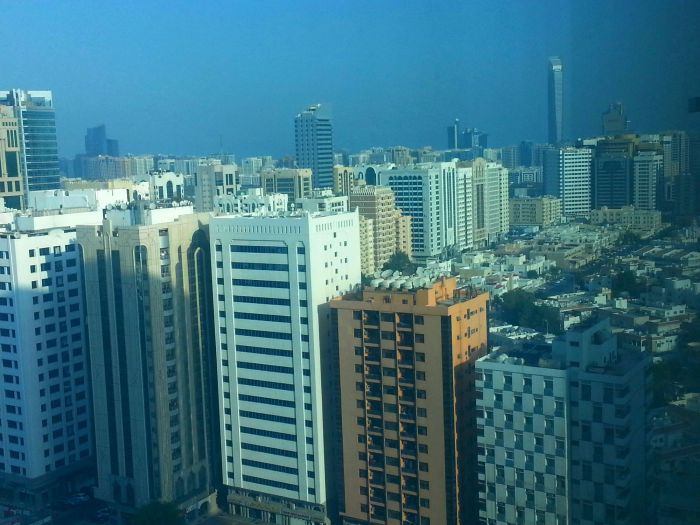 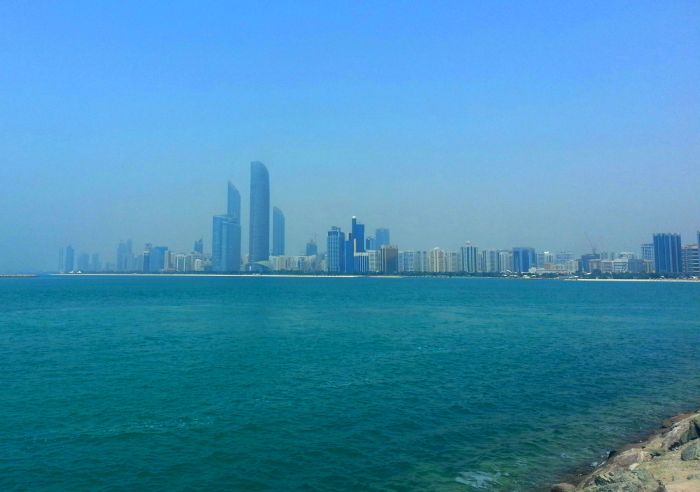 The curved glass on Etihad Towers gleams, even on hazy “dust days,” and currently stands as one of the city’s foremost architectural achievements. 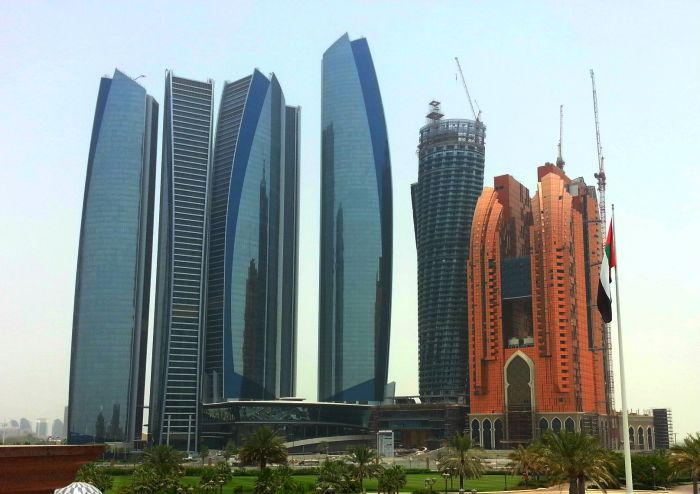 OK, the next building doesn’t strike me as particularly innovative, I just like it because it looks so phallic. Hehehe. I found it incredibly ironic, considering how much time the culture spends on avoiding talk and thoughts of naughty body parts and sex. 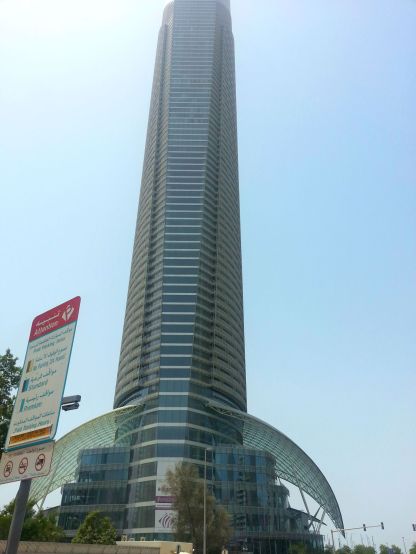 Don’t get me wrong, the whole city is not filled with towering new structures, by any means. There are countless neighborhoods with short, older buildings lining the back streets. Many feature small shops packed into a strip mall. Sure, on the surface these may not offer the most visually appealing architecture. But I like them because they provide a look at life in previous decades, and because they provide small business owners a more reasonably priced space from which to sell their wares. Plus, they provide a more “traditional” feel by resembling old markets. 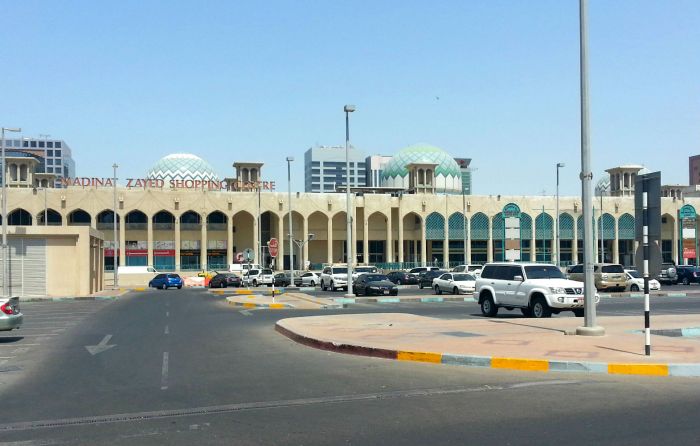 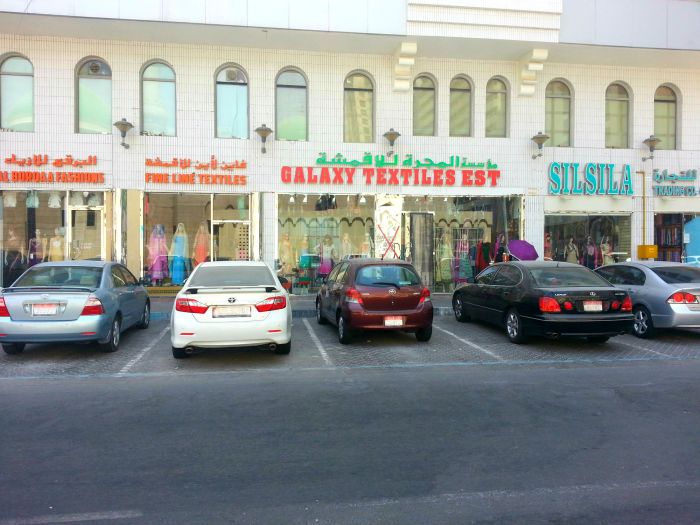 An example of old Abu Dhabi is Qasr al-Hosn, the city’s oldest building. Unfortunately, when I arrived I found it closed for renovations. I know, it’s completely shocking that information wasn’t on the website. Oh wait, not at all, if you read my previous post. Anyway, I only managed to snap a few exterior photos with the top wall peeking over a tall construction fence. It’s pretty wild to see skyscrapers right next to the historic site. 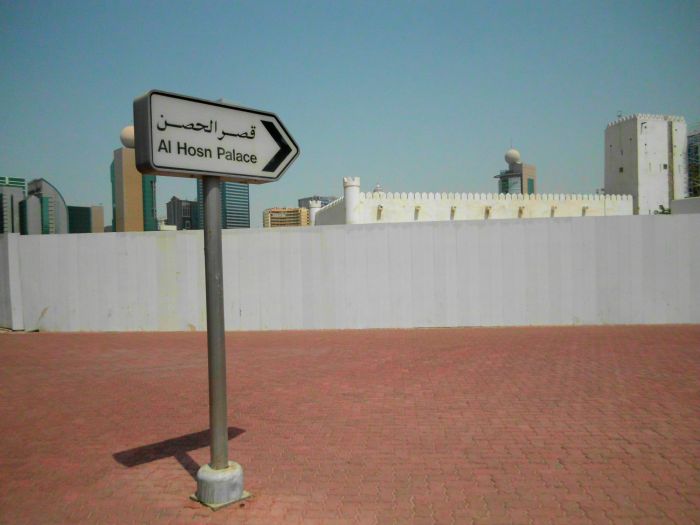 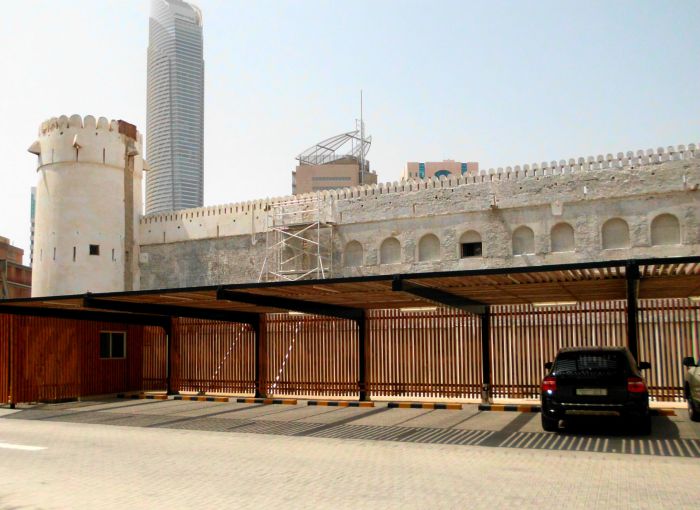 Adjacent to the structure stands a beautiful museum highlighting the history of Abu Dhabi. It doesn’t necessarily even look open from the outside, but it’s well put together inside and full of rich history… and it’s FREE. Go there if you have a chance. Walking into the exhibit area is impressive right from the start. 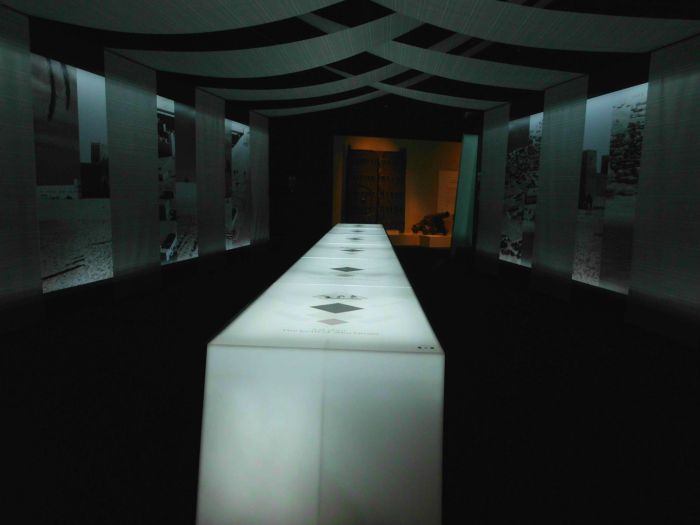 I learned that Qasr Al-Hosn started with just one small watchtower to defend the only freshwater well in Abu Dhabi, back in 1761. About 30 years later, it was expanded to a small fort that housed the ruling sheikh. Ah yes, and then oil money began pouring in, allowing for expansion. “Qasr Al-Hosn” is a combination of the words “fort” and “palace,” both of which the building served as in the past.

Visitors observe how Qasr Al-Hosn changed throughout the ages and what prompted each change. From water protection to pearl trading to the worldwide depression of the 1930s to oil exploration, visitors discover how rapidly the nomadic life gave way to a growing city. The exhibit includes wonderful old photographs from the 1800s and early 1900s. 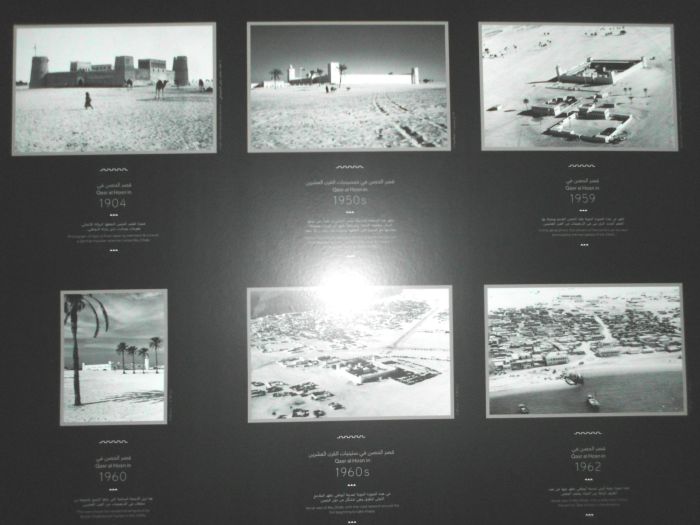 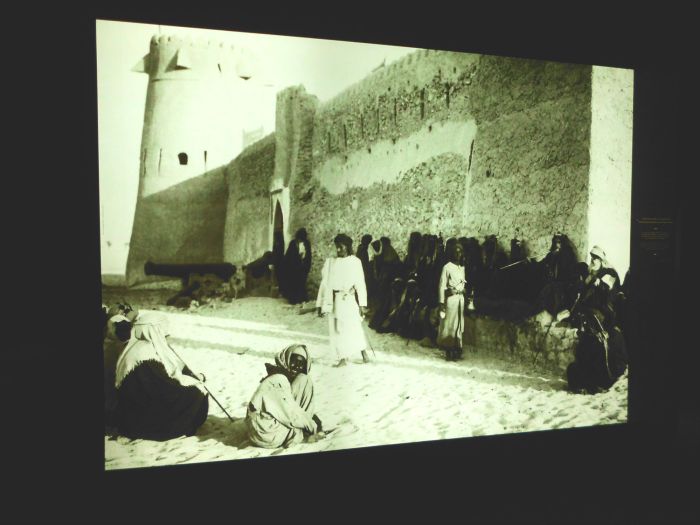 Here’s what the modern building looks like with all its expansions — when there isn’t a construction fence surrounding it — according to a photo inside the exhibit. 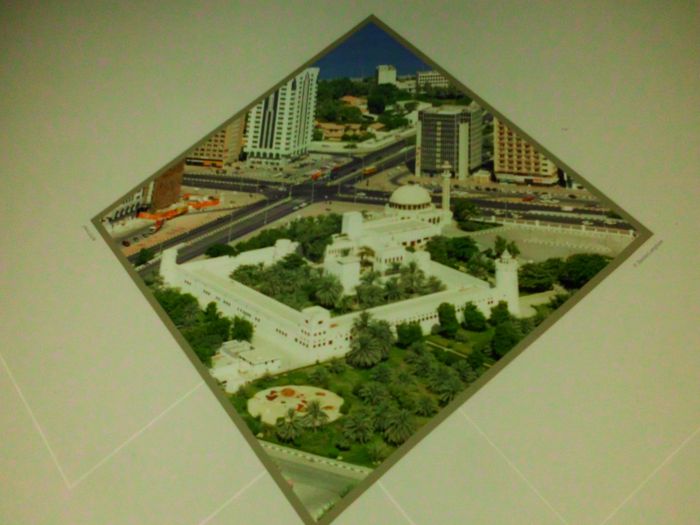 Emiratis even mastered constructing new edifices that look historic, like the Emirates Palace hotel. To me, it looks like it has been there for ages, but it just opened in 2005. 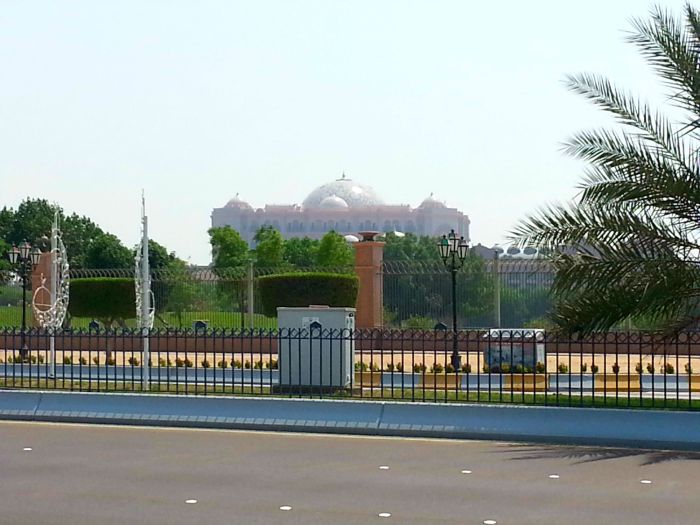 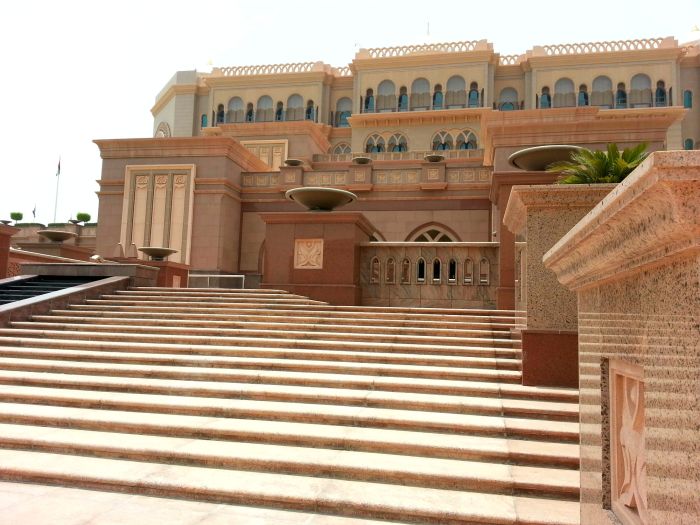 Another example is the World Trade Center Mall and Souq. It has beautiful wood designs both inside and on the façade. Folks, this is a mall. I’d be happy just to get rid of the dirty carpet in my mall, much less add this gorgeous detailing. 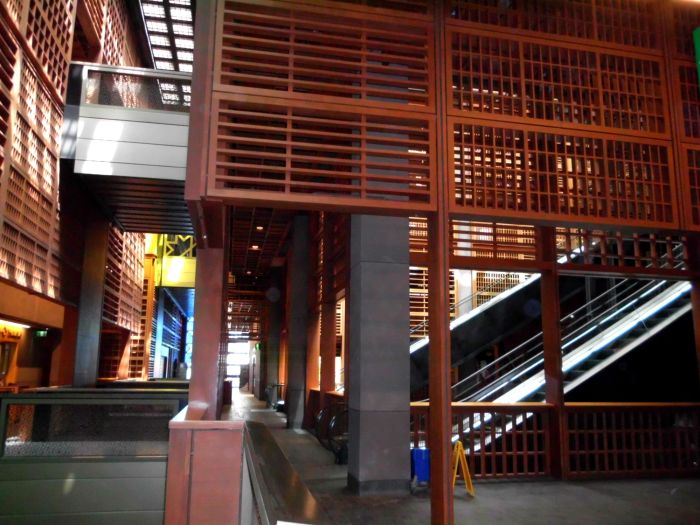 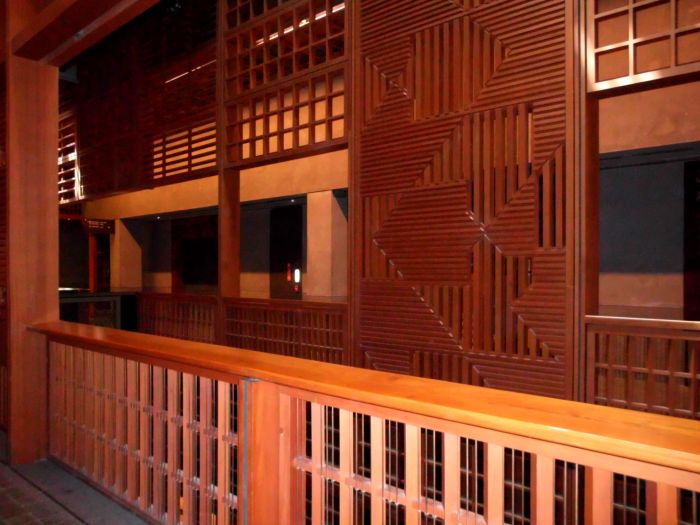 There are also sculptures highlighting elements of Abu Dhabi’s history, like these gigantic Arabic coffee pots at a park entrance. 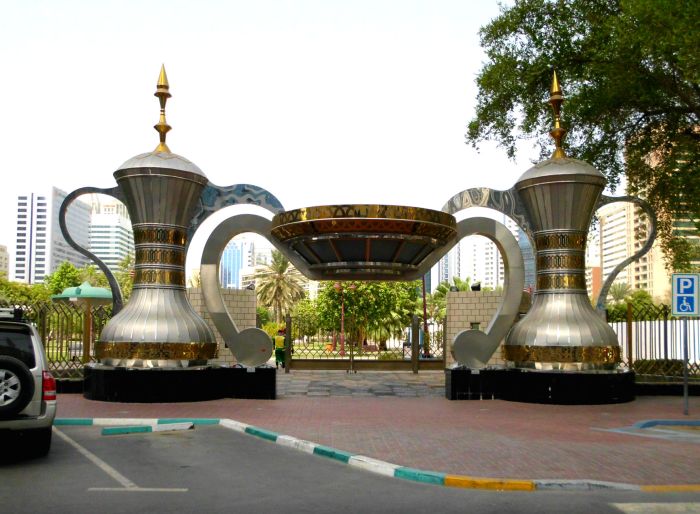 Or this monument of an incense burner, pot cover and perfume bottle. Isn’t it striking how ancient-looking the items appear, juxtaposed with the skyscrapers in the background?

I had assumed the spectacular Grand Mosque was built decades ago, but actually it just opened in 2007 (construction began in 1996)! Someone joked with me, “Well of course, didn’t you notice how clean and new it looked?” But as I mentioned in a previous post, the city generally is really clean so the mosque’s gleaming white walls and floors didn’t necessarily stand out in that regard. It just looked like a huge, gorgeous, ancient mosque. 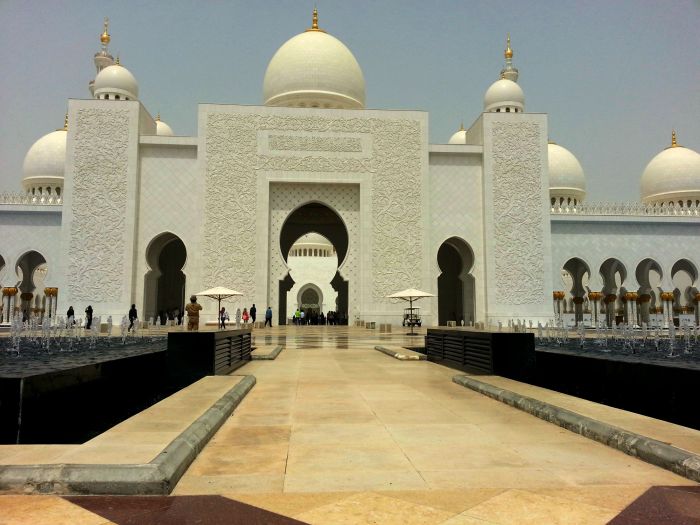 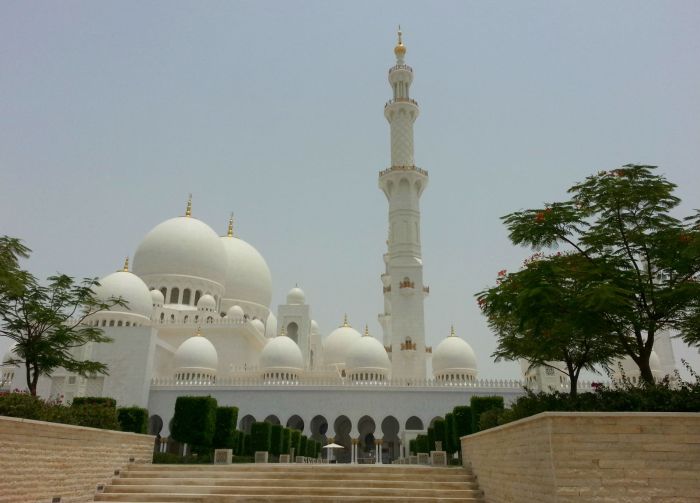 It’s probably the most-visited tourist destination in the area and can be busy at certain times, but the Grand Mosque really is worth exploring. Try to secure a guided tour, which provides in-depth information visitors cannot glean on a self-guided tour. Best of all, the entire thing is FREE. 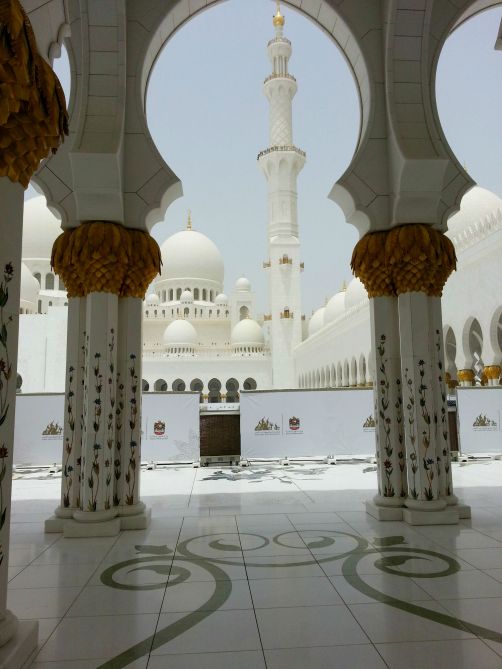 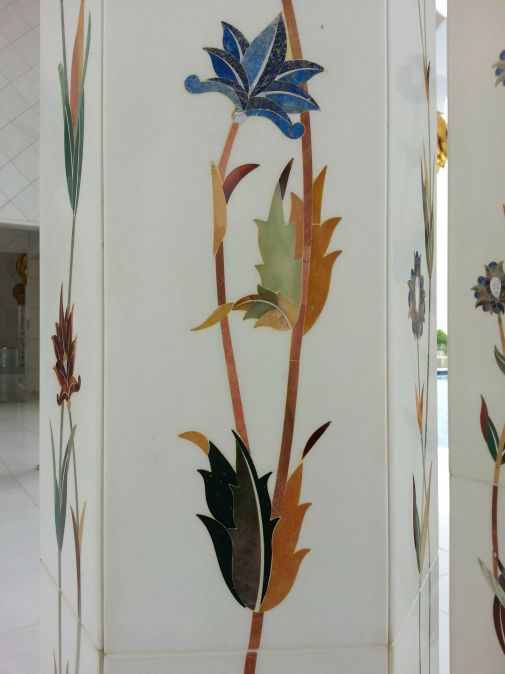 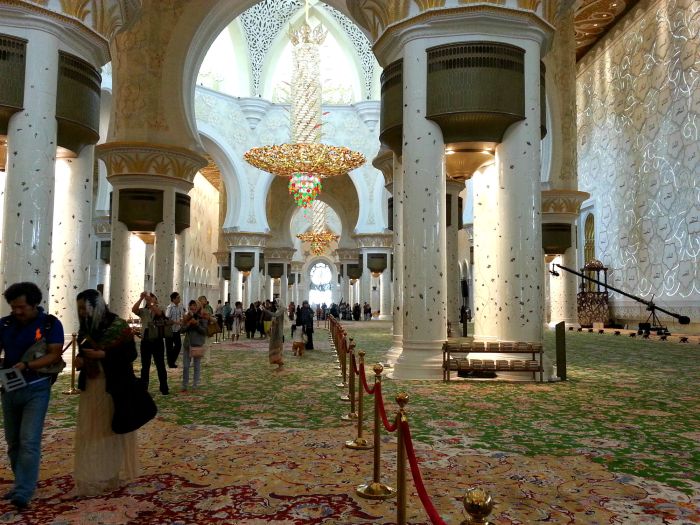 But remember, it is still a fully functioning place of worship, so be respectful. For women, that means you must be fully covered, or you must wear one of the complimentary abayas. If you go in summer, like I did, this means you will feel like you are going to melt in your black covering when exploring the outdoor portions of the mosque. I thought my flesh was on fire for a while. It really was worth it, though, even though I looked like one of the characters in Assassins Creed. 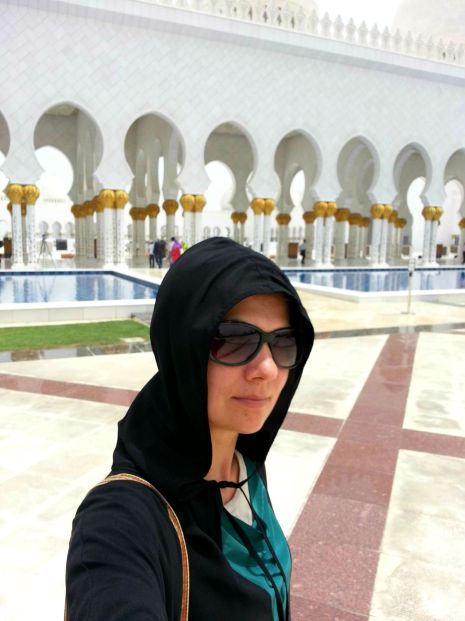 Now, if only Abu Dhabi would use its strategy for modernizing the skyline to do something about its streets to make them less confusing. I had heard from residents that until the past decade or so, a lot of the streets didn’t bear formal names and homes didn’t even always have addresses. Mail carriers just had to know who lived where and use landmarks to get to the correct place. I get it that the city really is quite new and continues to progress. But to visitors, roads such as Khalifa Bin Zayed the First Street, Sultan Bin Zayed the First Street, Zayed the First Street and Sultan Bin Zayed Street bear names far too similar to each other. They probably should not all be with a couple miles of each other, or more importantly, intersecting. 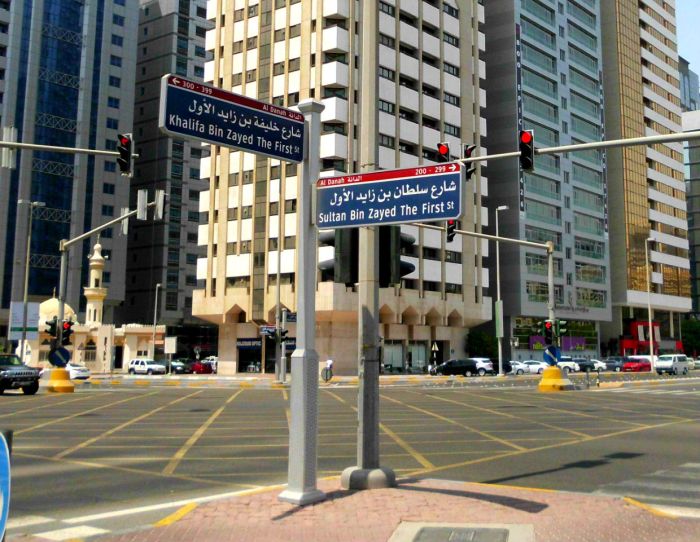 I can let that go, though. Circling the city in a lost state of confusion merely allows for more time taking in the fantastic architecture.