Mmmm, Turkey. Sure, the meat, but right now I’m talking about the country. The amazing country where apparently everyone can cook dishes so delectable they make angels weep with joy.

Being part Armenian, I grew up eating a lot of Mediterranean/Middle Eastern creations. Even though my great-great-aunt (whom I had the pleasure of knowing for 16 years) was Turkish, it never fully hit me how much culture the Turks and Armenians shared until traveling to Istanbul this year. It turns out all that stuff I ate as a kid wasn’t just Armenian after all. At least I picked up right away that “Turkish delight” wasn’t Armenian.

Turkish delight has been a mainstay in my family for decades. Every Thanksgiving and Christmas my grandma, who just passed away three months ago, would bring a box of Turkish delight (aka locum) to pass around for dessert. I also remember my great-grandma doing this. Some locum flavors I’d like, some I’d hate, but I think the tradition proved to be most important. I’d always sink my teeth into one of those small, chewy cubes just to giggle and feel like a part of the tradition the adults shared. As my grandma’s health declined over the past few years, one of my joys became eating a piece of the candy in front of her and watching a smile spread across her face. Her memory failed her in her twilight years, but the pride and happiness she exhibited when sharing one of her favorite treats never faded.

For those unfamiliar with Turkish delight, it’s like a gummy candy that isn’t as rubbery as traditional American gummies, but rather melts in your mouth (as long as it’s fresh). It comes in a plethora of flavors (strawberry, lime, mint, pomegranate, orange, lemon, rose water, etc.), can contain nuts (usually pistachios or hazelnuts) and apparently everyone in Istanbul loves it. I had no idea how abundant it would be in Istanbul. Really, it’s everywhere. It seems like every fourth store or so specializes in Turkish delight, and those that don’t specialize in it carry boxes of it anyway. I was like a kid in a candy store. Or an adult in a candy store, as the case may be. 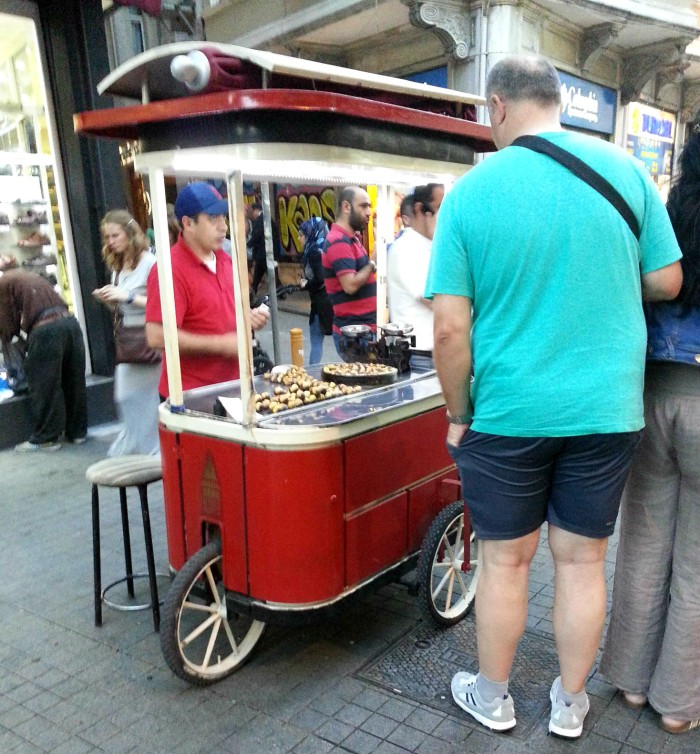 One of the most amazing parts about the street carts is that all the yummy munchies and drinks were SO. DARN. CHEAP. Water or freshly squeezed orange juice or a Turkish bagel for 50 cents each. Corn for 75 cents. A large doner sandwich (think of a gyro) for less than two dollars. This was my kind of place.

Another food I was delighted to stumble upon accidentally — and then find in some form in many restaurants — was burek. Just the thought of the savory pastry always makes me drool. The light, flaky layers of phyllo dough wrapped around tangy cheese or crumbly meat. Bliss. Think of spanakopita, but better.

My family always folded our burek into little single-serving triangles, so I was fascinated to see that nearly all of the Turkish restaurants made one huge, continuous pastry that gets cut into individual servings. I enjoyed seeing all the different places making different coils and winding shapes. Although Wikipedia’s photo of a burek coil doesn’t look quite as light and flaky as those I saw in person, its photo turned out much better than mine, so here you go:

When I walked into the first burek store and watched the server skillfully slice up the treat and pile it into a container, I was certain he didn’t understand that I only wanted one portion. But he did. I gulped when I asked the price, sure it was going to be about $12, considering it was enough food to feed a small family. I again thought he might not understand English when he said the bill only totaled the equivalent of two dollars. Two. My eyes grew wide, I slapped the money on the counter, grabbed my burek container, and held it high with victory as I marched into the street to nibble on the goods. It would be hard to replicate the pure joy I felt in finding and eating that wonderful, delectable pastry I had devoured like a fiend since youth.

Sitting down for a formal meal did not disappoint either. Countless restaurants line the winding streets of Istanbul; some so small they barely appear able to seat more than two people, others with dozens of tables sprawling out across the sidewalk.

As much as I want to say my favorite restaurant served only Turkish fare, the menu actually blended Turkish, Mediterranean and Balkan foods. Ara Kafe proved worth the challenge of tracking down… although it’s just off of the bustling Istiklal Caddesi. Even though this was the most expensive meal I had in Istanbul, it still was no more expensive than my average dinner back home in Washington, D.C.

The cafe bears the name of famed Turkish-Armenian photographer Ara Güler. As you can imagine, his works line the walls of the chill, artsy establishment. But let’s be honest, the ambiance provided me only so much distraction, because my laser focus zeroed in on the scrumptious food. These tender, tomato and pepper covered Balkan kofte (meatballs) did not disappoint. Neither did the perfectly chewy dumplings with yogurt sauce. Pure deliciousness. If you go to Istanbul, definitely get some good directions and go to Ara Kafe. Sorry for the blurry photo, but I was so excited to dig in that I couldn’t hold still.

Istanbul’s delectable flavors do not end at the food. Even the drinks made my taste buds applaud. We’ve already covered my love for Turkish coffee, so I’ll skip that and instead mention adult beverages. I typically don’t prefer fruity mixed drinks, but a bartender convinced me I’d like a pear-ginger cocktail because he could make it without sugar. Muddled pear? Yes, please. Freshly ground ginger? Oh, hells yeah. In case you can’t tell, this is my “keep your grubby mitts off my delicious pear-ginger cocktail” face (twisty straws optional). If only every cocktail could be this fresh and flavorful.

There was one drink, however, that didn’t resonate with me. Unfortunately, it happens to be Turkey’s national drink. It’s called raki and tastes strongly of the anise used in its production. I cannot deal with anise, so I took one sip and pawned that off on the hubby, who loves anise. Oh, and although it’s made with grapes, raki is distilled instead of fermented like wine… so it clocks in at 45% alcohol.

Although I didn’t dig the flavor of raki, it has a property that made me squeal like a little girl. It instantly turns milky when mixed with a little water or ice, due to the amount of anise it contains. It doesn’t affect the flavor or texture, just the appearance. The nickname for raki is “lion’s milk,” meaning “milk of the strong.” And you definitely do need to be strong to consume this potent alcoholic drink. Hate the flavor, love the name. 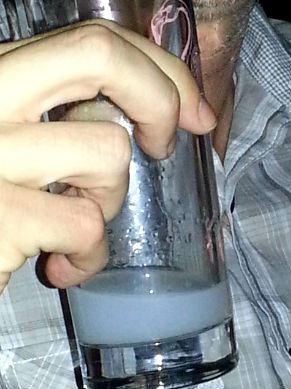 There was also one food item that grossed me out when I caught a glimpse of it. You know those giant, rotating “legs” of meat that get shaved for gyros and doner? I have known for some time that they are not pure meat and probably disgusting, but upon witnessing them being assembled firsthand, it changed me for the worse. One morning, I walked past a doner shop that hadn’t yet opened, and saw them assembling the meat on a skewer. I’m a huge carnivore, but I nearly gagged.

This photo definitely does not do justice to how nasty it looked in person. Layers of fatty meat that appeared to be beef (I think?), with some lamb slices mashed in and then some sort of fat or tendon-like deposits laid on top. Observing this prevented me from eating meat again…

…for a whole three hours. Fine, fine, it really did deter me from eating doner again that trip. But I couldn’t swear off meat altogether with all the amazing dishes just begging to be consumed in this city, this amazing carnivore’s playland.

My time in Istanbul taught me many things, but perhaps the most important is that if I lived there I’d be a complete fat ass. The food tastes incredible, is cheap and I couldn’t stop eating the entire time I was there. Finally, I visited a country that reveres lamb as much as I do. Sigh. I think it may be time to start planning another Istanbul trip. But first, I better buy some stretchy pants to accommodate my expanding belly on the culinary journey.

One thought on “Turkey is Delectable”