You can read travel guides, watch videos, scour the internet and ask friends for information about your new travel destinations, but almost always you will be met with some surprises. I really think you’ll find at least one small thing at each new place that leaves you wondering “why didn’t I know this?” or “why didn’t they tell me THAT?”

That’s what this segment is all about. Today, a look at what I didn’t expect in Istanbul.

1. King of the hill — If you’re looking for a fabulous destination that allows you to get a glimpse of ancient buildings while getting a killer cardio workout, Istanbul is the right answer thanks to its steep hills. Not only that, but a lot of the streets and sidewalks are brick or cobblestone, adding an extra element of trickiness for walkers. I knew it was supposed to be a little hilly, but I didn’t realize to what extent. Let’s just say no matter how much you want to wear cute heels or wedges, you should just give up and go for practical, covered flats. You might think you can avoid the hills by say, taking a taxi, but let me assure you the traffic is horrible and the drivers insane! You’ll resort to walking everywhere after just one taxi ride.

2. Continental divide — There’s this imaginary line running through the city called the “continental divide” because Istanbul lies half in Europe and half in Asia. So of course you’ll want to straddle the line to be on both continents at once, right? *Yawn* The continental divide actually rests in the middle of the Bosphorus, a waterway splitting the city. There really are no notable differences between the Asian and European sides. It is more fun to say you’ve been to both sides than to actually experience it.

But don’t ignore a boat trip on the Bosphorus just because the continental divide isn’t impressive. The waterway and its surroundings really are beautiful and a tour allows you to peek at palaces and other historical sites. Plus, it’s only a few dollars for a two-hour tour. Definitely worth your time. 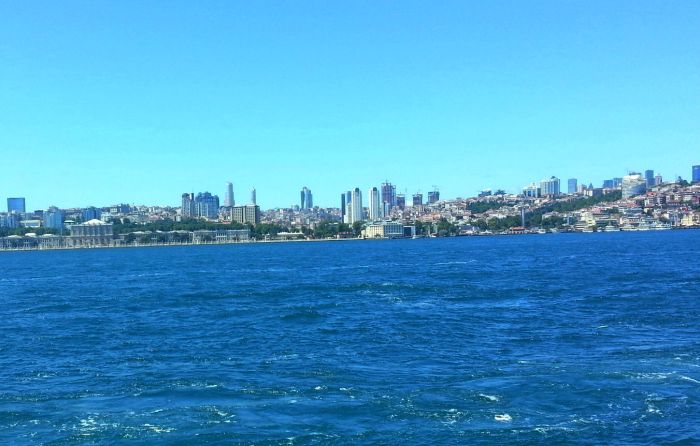 3. Hard workers — Sometimes I visit places and upon looking around I wonder, “what the heck do the locals do for work here?” If the city has an office culture, locals are harder to spot on the streets during the day. That was not the case in Istanbul. All day, every day, locals bustle in the streets to make a living. Whether its selling wares at a market, working in the service industry, fishing, fixing household items or peddling fruits, the people of Istanbul really appeared to be hard workers. Check out this guy breaking his back to get his wares to his market stall. This type of thing happens near most of the markets. I thought it was a show for the tourists until I realized the hubby and I were the only tourists around, because this was a market frequented by locals, not tourists. 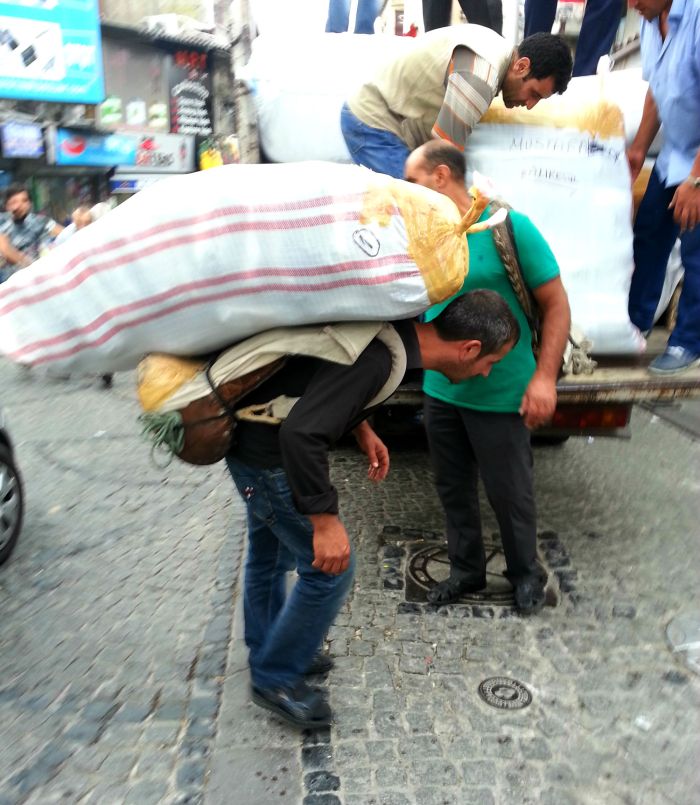 The people also work hard just at surviving. For example, every day there were dozens of very elderly people making a go of navigating the winding streets. They’d inch along and take a long time to climb stairs, but my gosh were they impressive. It really struck me how some had canes, but none of them used wheelchairs. They struggled through and made it to their destinations. These elderly people really are badass! It seemed so different from how many Americans leap at the chance to drive somewhere or sit down or find any option other than walking or struggling. The folks in Istanbul were hearty and I loved their tenacity and spunkiness.

4. Watch your money — Although the residents seemed to work hard, there also exists a less positive culture in Istanbul — scamming. I had been warned of pickpockets and of some antiquated cons such as the “shoe brush” scam. I actually witnessed this one — a shoe shine guy packs up his stuff and walks away from his designated spot, then drops a brush. When a kind passerby alerts the guy to his dropped brush, he follows the person and thanks them profusely, insisting on giving them a free shoe shine. After the “free shoe shine” he then loudly demands money for his services. There are many cons similar to this. I never let my guard down and tried to stay alert to any possible scams… like when I ordered one thing and the waiter brought a similar, yet more expensive, item and wouldn’t let me return it. I’m just saying, pay close attention to everything. It especially stuck out to me having just come from the UAE, where everything is incredibly orderly and people are law abiding to a T. Although Istanbul seemed to be a city of hustlers, oddly the people still are really nice. You almost want to hand over your money because they’re so personable. Almost.

5. Lots of laughter — Even when scamming others, I found Istanbul residents exhibited a fabulous sense of humor. “Hey! I’m a Mario Brother and it’s my birthday! Buy from me!” They typically understand an incredible amount of English and love to joke around. But even if they don’t exactly understand what you’re saying, they will joke about it. I admire this lighthearted attitude and ability to stay positive. I also commend the ability to be funny in other languages. If you’ve never tried it and don’t understand how hard it is to make colloquialisms translate properly, try learning a random language like Portuguese, then try grasping the intricacies of the language enough to use slang and tell jokes to native speakers. It’s not as easy as it sounds.

6. Night owls — Apparently the locals not only work hard, but play hard, too. The hubby and I were the earliest people up and at ’em every day. Granted, there was a certain element of jet lag and we wouldn’t typically be up that early, but still. The main drag of shops and restaurants usually wouldn’t really come alive until noon, and then people stayed out with friends until all hours of the night/early morning. It was particularly fun to watch all the chaos at 4:00 a.m. when I took a taxi to the airport. Being more of a night owl myself, I applaud the locals and their shunning of the morning.

7. Don’t wear white — It has nothing to do with fashion, but rather the cleanliness of the city… or lack thereof. Istanbul is an old, beautiful city full of interesting people. But clean it is not. Again, having just come from the UAE, which is incredibly clean, the contrast was particularly noticeable. It’s dusty/dirty and some portions have litter or debris in the street. I learned the hard way that covered shoes are essential because some shop and restaurant owners hose down the sidewalks and streets in front of their establishment, sending rivers of dirty water flowing over the many, many hills. Obviously, some parts are cleaner than others, but I still wouldn’t recommend wearing your best clothes and shoes for exploring the city. Adding to the dirtiness…

8. Feral cats. Everywhere. — OK, admittedly I am not a cat person, I’m all about the dogs. Spending time in Istanbul made me even less of a cat person. There are feral cats everywhere and I found it pretty gross. The smell of cat urine in certain areas is so pungent it can turn your stomach. In a city with such amazing culinary delights, I wanted to sniff the tantalizing food smells, not get knocked over by a whiff of cat pee. Adding to the problem is that some people leave food on the street for the cats. The leftover food rots and adds even more unpleasant smells to the mix. A few cats wandered up to me throughout my trip, apparently begging to be petted or fed. In any normal situation I probably would have obliged. But standing in pee-drenched streets with a mangy-looking cat staring back at me? Nuh uh. All I could picture were the 15 different diseases those cats would give me. The cat pee is yet another reason to wear sturdy, covered shoes. Those cats are not quiet either. Sometimes at night I could hear them crying or mating or battling or whatever it is that they were doing that sounded like children wailing and fighting. And I could hear them plop on the metal roof next door. Bob Barker would be absolutely appalled by the cats roaming the streets.

Look at the following photo. There are four cats in front of the building, and those are only the ones I can see in the photo. I remember spotting more in person. So many more.

Or this one. Four cats within 10 feet of each other, and some others wandered inside the store. Seriously, it’s like a frigging Alfred Hitchcock movie in the making.

I understand from other blogs that cats exhibit varying stages of health in different portions of the city, so maybe I just encountered the nastier ones. Apparently there are reasons for the incredibly large cat population, one theory being religion. I love animals and in no way suggest being cruel to the cats. I merely suggest keeping pets inside and in control. This is not a squirrel that can provide for itself. As evidenced by the scrawny cats in some parts of the city, these animals aren’t self-sufficient and rely on the handouts of humans. So if you want a cute pet, please feed and keep it inside the home. The smell in the streets and judging eyes of all these crazy, wandering cats still haunts my dreams.

9. Liberal interpretation of Islam — Turkey’s population is about 98% Muslim and they do the call to prayer throughout the day, just like other predominantly Muslim countries. But Turks don’t go about their religion as strictly as people in other Muslim nations. I knew this to some degree, but thought things would be stricter because it was Ramadan. I thought restaurants in Istanbul would be closed during the day and I’d have to abide by the same “nothing past the lips until sundown” rules I had to follow in the UAE. But that wasn’t the case at all. Also a surprise was the prevalence of alcohol and locals drinking it. Plus, nobody cared if my arms and legs were properly covered. The women did not cover up with hijabs; in fact, until last year, religious head scarfs were banned in government workplaces. They were banned at universities until 2011. That’s quite a difference from other Muslim countries that require such coverings. I heard that people in smaller cities in Turkey practice more conservatively, but they still aren’t as strict as other Muslim countries. It was interesting to experience the more secular society and more liberal interpretation of Islam in Istanbul.

Obviously, everyone’s experience is different and these are just some things that struck me, personally. Let me know in the comments section if you were surprised by anything while visiting Istanbul (or other parts of Turkey).

3 thoughts on “Things They Don’t Tell You: Istanbul”