Yep, that’s right. I’m sure the Beatles would have written their song closer to my version if they partook in the birthday weekend to which I was treated. Thanks to a hubby who racks up free flights due to nonstop travel for work, I got myself a free little birthday trip to Aruba. Huzzah! Whisk away the wife to wine and dine in an exotic location instead of in 30 degree weather? That guy sure knows how to win bonus points. 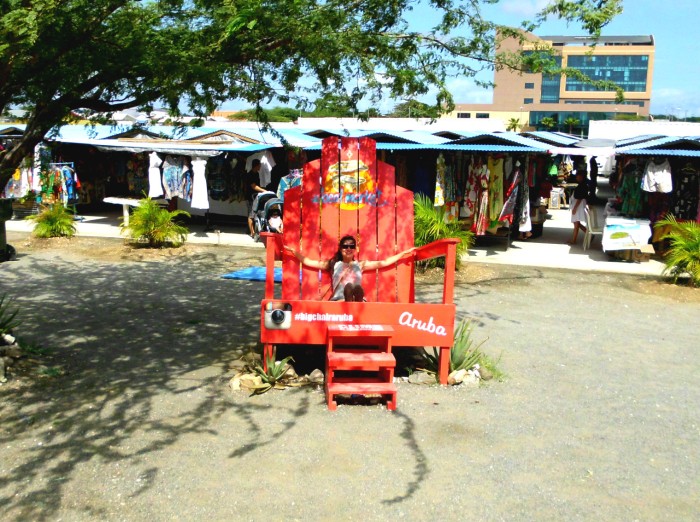 The day began with a ridiculously rich, delicious breakfast at The Dutch Pancakehouse.

I learned my new favorite word: poffertjes (POFF-er-tees), or small, puffy Dutch pancakes with powdered sugar. Typically I wouldn’t kick off the day with something so indulgent and calorie rich, but hey, IT’S MY BIRTHDAY AND I’LL DO WHAT I WANT!! Plus, the pancakes came with a side of egg nog for dipping. I’m pretty well known for my odd obsession with egg nog, so it should come as no surprise that I stuffed my face with every last one of those egg nog poffertjes, making sounds of sheer happiness the entire time. Then I used the leftover egg nog as creamer for my coffee. The hubby laughed at me all throughout breakfast and I’m pretty sure people at neighboring tables stared at the spectacle. I don’t even care; those tiny cakes were magical and worth the clogged arteries they likely caused.

Most people probably wouldn’t consider a 10 mile walk the ideal birthday activity, but I did after waddling away from the breakfast table. I wandered the rocks along the shore in Oranjestad, then headed northwest toward the resorts of Palm Beach. Boy, were the animals intent on putting on a show. Crabs and iguanas scurried every which way when I just looked at them. I envisioned them screaming, “Look out! The giant is coming!” The birds were disinterested in my presence and focused on their fishing. 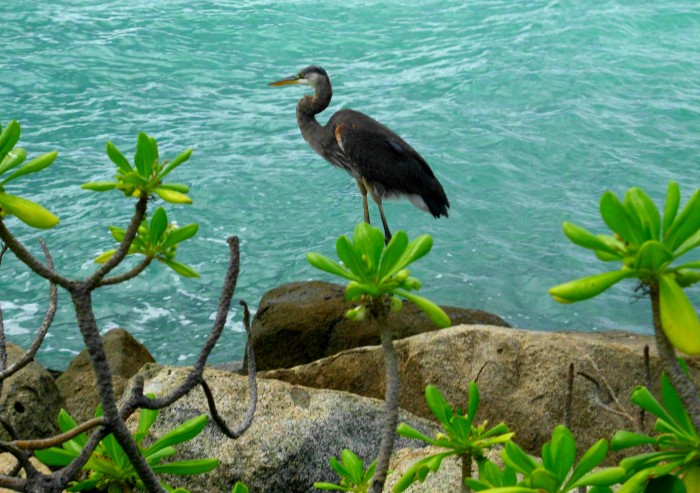 Sunshine illuminates the turquoise water that butts up to miles and miles of pristine beaches and rocky shore.

You might think that after my bajillion calorie breakfast, I wouldn’t be hungry until dinner. You might think that, but then you would be wrong. Typically I prefer to eat local dishes while visiting exotic locations, but the lure of Scott’s Brats was too strong to resist. It’s one of the few non-chain eateries near the resorts at Palm Beach/Eagle Beach.

I felt compelled to honor my Wisconsin roots and munch on a big Johnsonville brat, served up by two friendly Wisconsin transplants now working on a beach in Aruba. Birthday brats on the beach. Bitchin’. 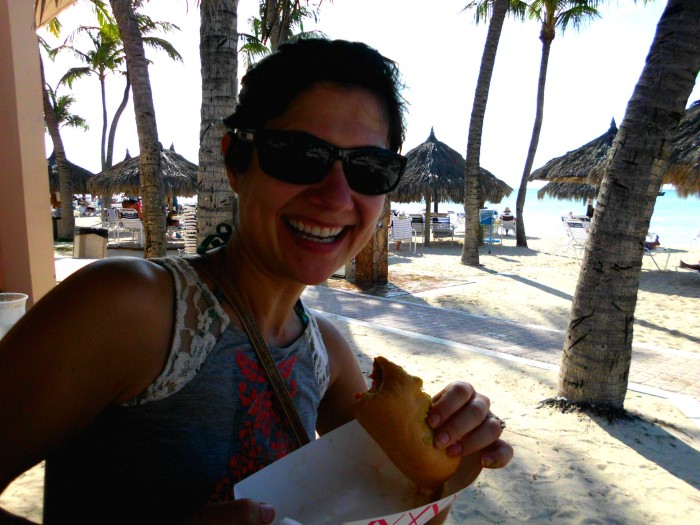 It’s rainy season, so each day clouds briefly rolled in and provided sprinkles. But it was a warm rain and felt great. After a few minutes, the clouds would move on and allow visitors to bake again in the 88 degree heat.

The Renaissance Hotel stood out so much when I stayed there two years ago that it was a no brainer to stay there again. The best part is that the hotel has its own private island and a water taxi picks up island goers right in the hotel lobby.

The journey to the island just happens to be smack dab under the flight path for arriving airplanes. You know that scene in Wayne’s World when Wayne and Garth lie down while planes zoom over them? That’s exactly how this experience played out, except on a boat.

Oh, and Renaissance Island isn’t too shabby either! 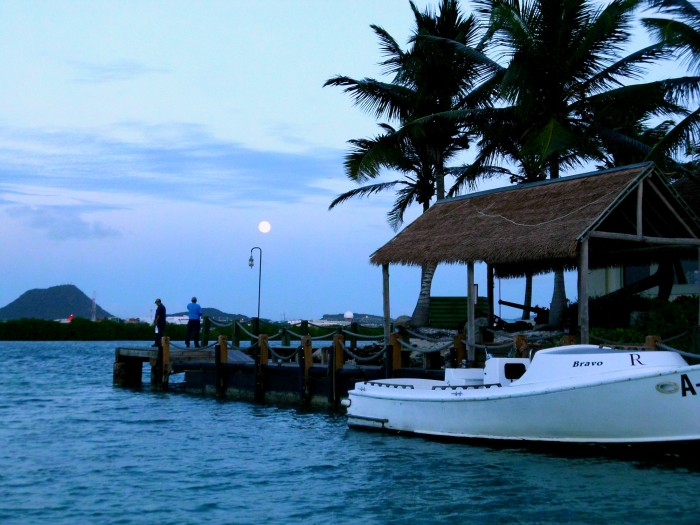 Growing up, my parents always cooked whatever my brother and I wanted on our birthdays or took us to whichever restaurant we desired. The hubby keeps up this tradition and I always end up like a satisfied plump piggy at the end of the day. I’m not even sorry. This year’s dinner at Yemanja Woodfired Grill did not disappoint. I ate grilled shrimp, mahi and grouper until I thought my stomach would burst like a bad horror movie. Plus shared sides. Plus a scotch cocktail with smoke infused ice cubes. Can you say food coma?

And of course, I can’t resist the draw of local drinks, so the evening ended with a few of these at our hotel bar:

The bar’s name is Blue. Fittingly, everything’s illuminated with blue. It blue my mind. Haha, OK I’m a weirdo.

Aruba embraces the slogan “One Happy Island.” After such a fun-filled weekend, not only can I vouch for the slogan’s accuracy, but add that it makes for “One Happy Birthday.”

One thought on “Older, Wiser, Warmer”