Isn’t vacation grand? You’re away from work, relaxing, exploring and feasting in a destination that’s exciting simply because it’s not your home. But sometimes while enjoying an escape, you get a glimpse of real life in that place. A glimpse without the façade put on for tourists. Sometimes it’s gritty and sometimes unpleasant.

When visiting Vancouver, I thought I would walk to Chinatown from nearby hip, gentrified Gastown. Being that the two neighborhoods are only a few blocks apart, I didn’t think anything of just walking there. Boy was I wrong.

I tried taking the most obvious route and within a block and a half I felt uncomfortable with the people hanging out there, so I turned down another street. I walked a block in that direction and started feeling nervous as well. Generally I don’t get scared by homeless people because I literally encounter them every day at home in D.C., but these people acted and looked different than the average homeless person I’m familiar with. Many of them were physically dirty, appeared unhealthy and had a slightly frightening look in their eyes. Don’t get me wrong, I don’t usually avoid people because they look different, but these people’s behaviors downright made me scared.

On my third attempt, I turned down a street where there were farmers market-type tents. The street was blocked off and filled with people; not being one to turn down a chance to check out a market, of course I went into the middle of it. All of the people at this market looked like the rough element I had encountered a few blocks away, and I got weird glances. I looked down at the goods on the blankets spread in the street and it looked… well… like trash. A lone beat-up sneaker here, a ratty pair of jeans there, electronics parts, a porno mag. Upon realizing I was one of the only women there, I pushed my way out of the crush of people and walked quickly toward an area I knew was safe. I thought I was being inconspicuous until a visibly strung-out man pointed to me and grunted to his buddies, “Huh, look at this one.” There were chuckles all around and then someone else grunted something about “nice and fancy.”

I found out I had wandered into the absolute worst neighborhood in Vancouver. Anyone who thinks there are no bad neighborhoods in Canada, especially Vancouver, needs a re-calibration. It’s the city’s Downtown Eastside (DTES), known as a haven for not just the homeless, but drug addicts. That’s the part that made me so nervous because you never know how addicts will act. Especially crack, heroin and meth addicts, which is what I was told is prevalent in that neighborhood. It literally is Canada’s poorest postal code and it’s painful to watch its residents on the streets.

The DTES Street Market was set up to help the neighborhood’s residents make a little extra income to supplement their welfare payments. It runs every Sunday and up to 200 vendors get free space to sell their wares. I heard a couple people refer to it as the “trash market” because the vendors collect their goods from garbage bins throughout the city. That means the market vendors actually are doing the city a service by recovering re-usable items that otherwise would have gone to a landfill. Quite frankly, some of the goods are really nice and worth purchasing, and there were a few better-off people checking out the wares. But there is also a lot of junk. You definitely need to have a discerning eye if you want to buy something. 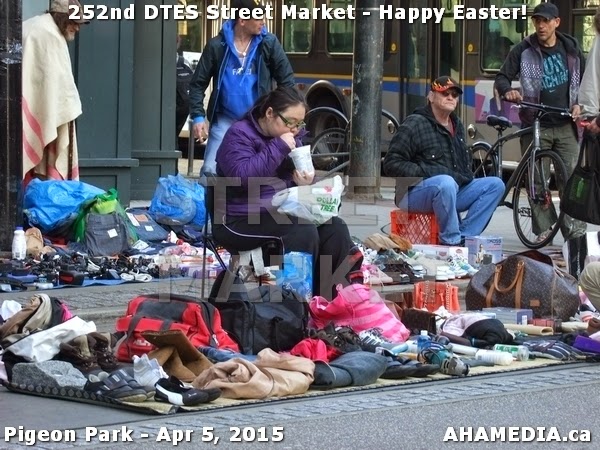 Although I was nervous and got harassed a couple times walking through DTES, many residents contend the area isn’t a problem and visitors shouldn’t fear the people there. I’m sure a man would have been OK, and I would have been fine if I had been with someone else, but as a woman walking alone it was not the best scene. The DTES Street Market website says about a third of the vendors are women and many of them current or former sex workers. Maybe that’s why I was harassed, because they thought I was a “fancy” prostitute.

If you’re in Vancouver on a Sunday and have a walking partner, check out the DTES Street Market. Sometimes spending time in a rough neighborhood is the best thing to blatantly see how difficult life can be. Every time I think of my short visit to the DTES I am reminded of how incredibly lucky I am to have the life I do, especially such a strong support system of wonderful family and friends. Be grateful for what you have, dear readers, because as Vancouver’s homeless inhabitants demonstrate, you never know when your luck will run out.