Ohhh the love locks on the Pont des Artes in Paris! How romantic! What an incredible age-old tradition to take part in! Surely affixing a lock to the bridge and throwing the key in the Seine River means your love will last forever!

False. The love lock “tradition” began just a few years ago — sometime between 2006 and 2008, depending on who you ask — based on characters’ actions in a book and movie released in the mid-2000s. Keep in mind that this was such an incredibly touristy thing that some Parisians looking to make a quick buck (errr, Euro) would sell the cheap locks to tourists wishing to express their undying love. Yeeeaaaah, that’s really meaningful. To deface a city’s historical places and architecture for the sake of a fabricated tourist “tradition” makes me roll my eyes and scoff.

I had first visited Paris in 2005 before the trend caught on and was horrified when I returned in 2013 and saw the beautiful bridge covered with the hideous metal locks. How cheesy!! 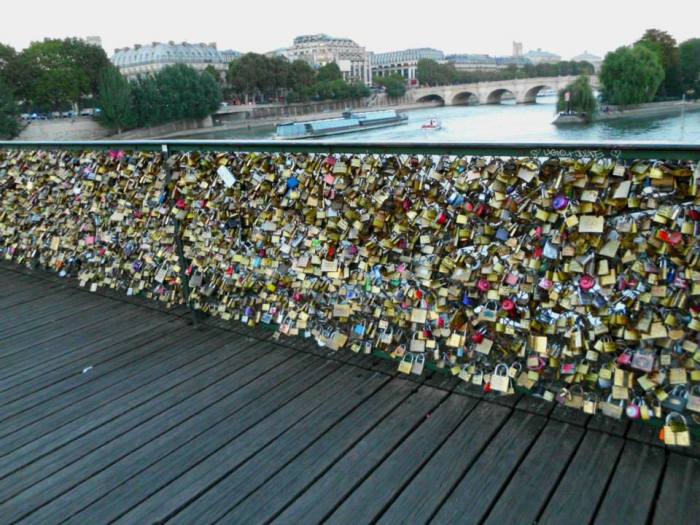 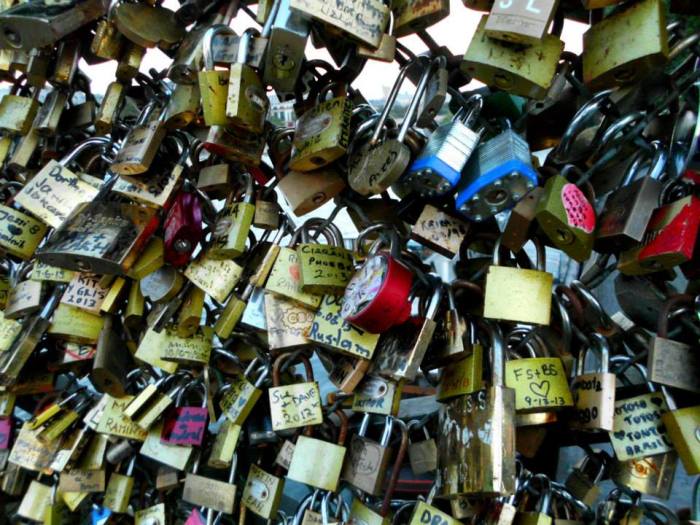 The locks sometimes were cut off the bridge due to their weight dragging down the structure, but it wasn’t until the second railing collapse last year that the city government said enough is enough. They took down the chain-link style railings and put up plexiglass, saying the 45 tons of locks posed a safety hazard. Clearly I’m not a love locks sympathizer and I’m happy to see them gone.

I’m also happy the city has brought art back to Pont des Artes. The first installment came almost exactly a year after the bridge’s upgrade. I bring to you “La Passarelle Enchantée” or “The Enchanted Bridge” by Daniel Hourdé. It depicts “elves, fairies, devils, or gods” with humans struggling between moments of extreme joy and pain in a forest of large, polished metal trees. The artist chose trees because the original architects of the bridge in the early 1800s had wanted it to be a suspended garden. 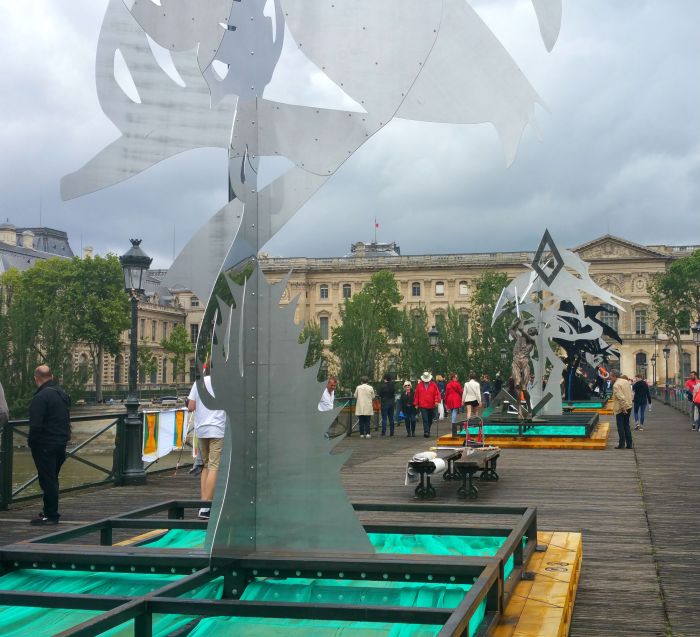 The display has received mixed reviews, with some people claiming it’s an eyesore that doesn’t belong on a beloved bridge in Paris. Personally, I think the ugly padlocks previously gracing this space were the real eyesore. The sculptures show a lot of anguish and struggle and I think that may be what makes so many people feel uncomfortable when they look at them. Art isn’t always simple and happy and seen through rose colored glasses. Sometimes it’s dark or difficult and can elicit feelings of discomfort. Either way, it makes viewers deeply analyze what they’re seeing and better get in touch with their thoughts and feelings about the art. 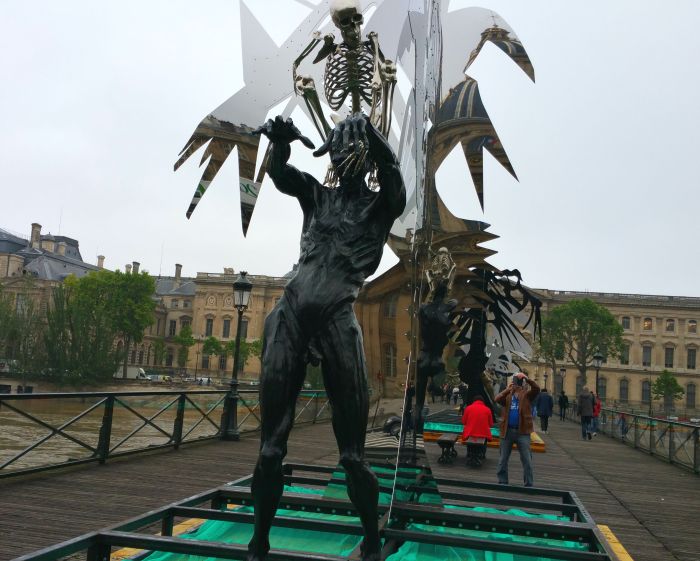 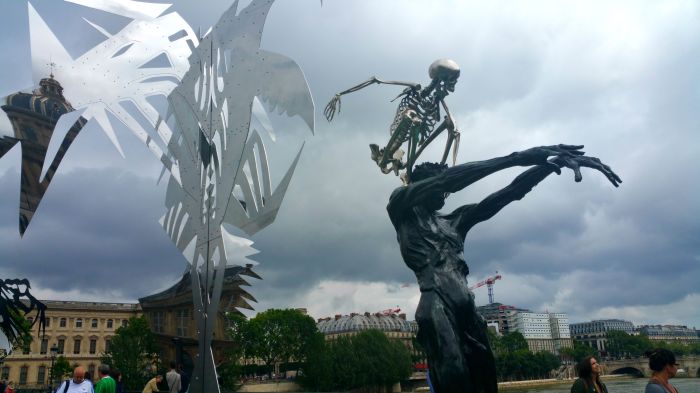 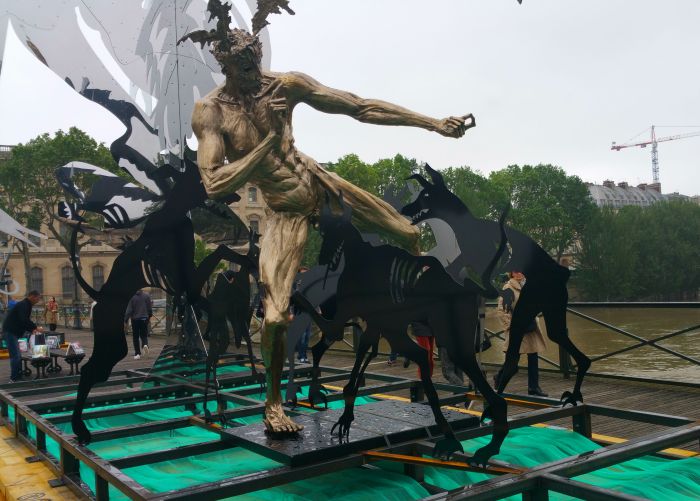 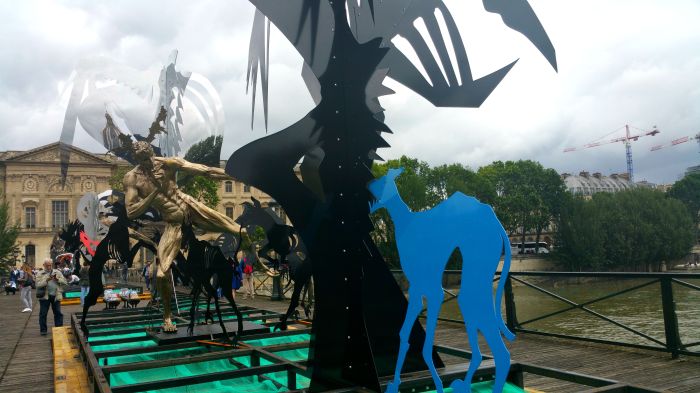 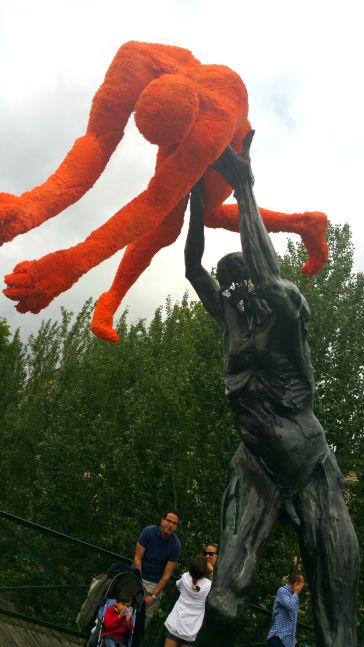 These sculptures are larger than life but the detail to human features like bone structure and muscle tone almost makes it appear that they were actually cast from real bodies. The exaggerated hands and feet really caught my attention as well. 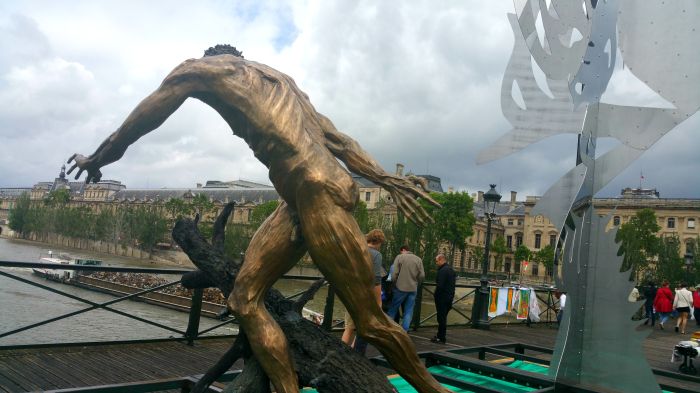 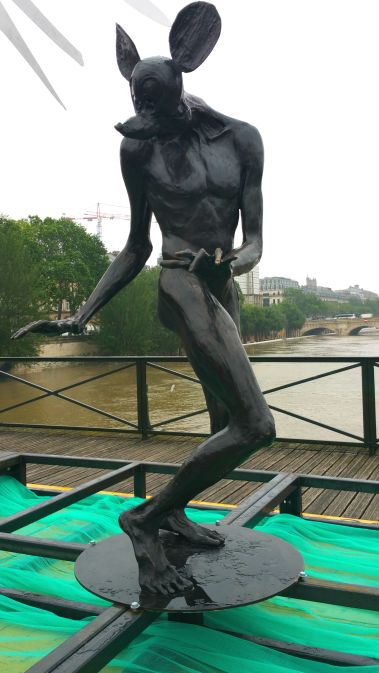 This one depicts the sky falling in on a person. The falling objects literally are the Greek letters for sky. Clever. 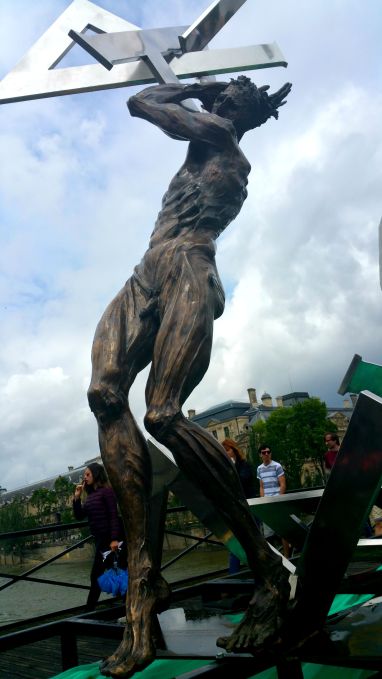 Although I’m sure this particular art installation would dazzle in the sunlight, there’s something about the nearly constant gray skies for the past month that seems to perfectly mesh with the dark, haunting mood of these sculpted characters. (FYI, the announcement came yesterday that Paris has officially had its wettest spring in 150 years, as evidenced in my previous post about the Seine flooding. I’m beginning to forget what the sun looks like.) Here are two photos of the display taken from a distance, courtesy of Daniel Hourdé’s Facebook page. 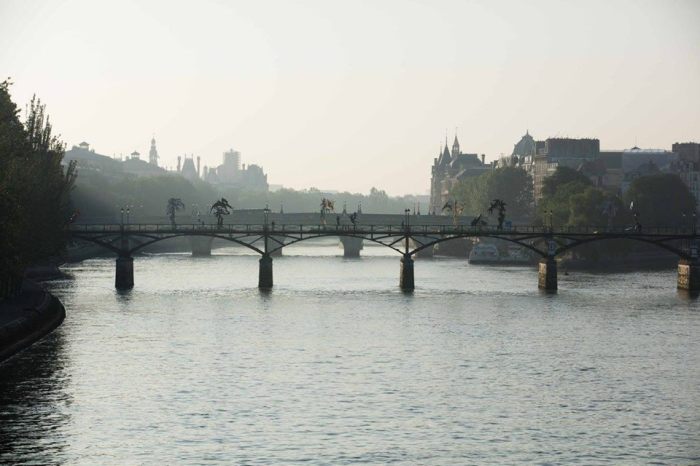 Love it or hate it, the installment certainly is thought provoking. I love it and can’t wait to see future cultural installments on this historic bridge. La Passarelle Enchantée was only supposed to run through June 12 but has been extended until June 26. Definitely check it out if you’re in Paris and draw your own conclusions about the unique sculptures.