You can read travel guides, watch videos, scour the internet and ask friends for information about your new travel destinations, but almost always you will be met with some surprises. I really think you’ll find at least one small thing at each new place that leaves you wondering “why didn’t I know this?” or “why didn’t they tell me THAT?”

That’s what this segment is all about. Today, a look at what I didn’t expect in Aruba.

1. Welcome to the Desert — If I tell you Aruba is a desert, you might think I had one too many rum drinks. While that is probably true about the drinks, the statement about the desert also is true. The beaches have been planted with palm trees and other lush plants to appeal to the tourists. But going even a little bit off the beach (especially into the center of the island) provides a different experience, complete with dusty fields, scrubby desert plants and cacti. Yes, that’s right, even during my walk right along the water I found many cacti. 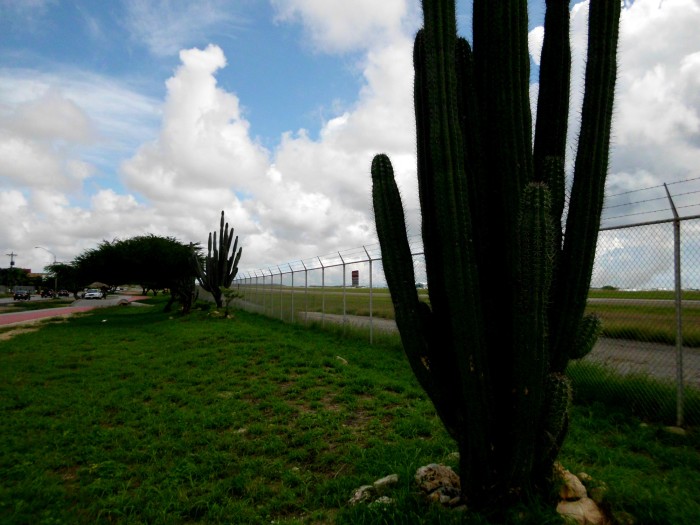 The lack of rainfall and being outside the hurricane belt makes for fantastic weather year-round. My most recent trip took place during low season when there’s a little more rain, but that just meant one day there was an afternoon shower for a few minutes. And it was hot rain, which felt amazing. Although humidity tends to linger around 75%, it doesn’t feel that bad thanks to…

2. Wind Blown — Aruba boasts a nearly constant breeze which makes it feel cooler than it really is. When it’s 88, it probably only feels like 80 and with lower humidity. It’s glorious. The winds also are fantastic for sports like windsurfing. Truth be told, the “breeze” I had been told about often felt more like a downright wind, so short skirts and loose, long hair were a challenge. Unfortunately, during unusual weather patterns and around low season (September-December) the winds really die down and that creates an annoying problem…

3. Bugging Out — Mosquitoes, mosquitoes, mosquitoes. For those of you lucky jerks immune to the horrors of biting insects, this item probably won’t bother you much. But for those like myself who walk away from a summer evening outdoors with 40 bites — even after bathing in DEET — this message is for you. Bring bug spray and apply liberally. Luckily, mosquitoes aren’t so much a problem unless it’s one of the aforementioned low wind periods. Which it happened to be both times I visited. Be warned that black flies and other bugs also create a nuisance. Those mostly flew around the food and drinks while I ate at outdoor establishments. As annoying as it is to keep swatting away flies, I will continue to do that if it means dining outdoors.

4. Black gold —  Other than tourism, oil refining remains Aruba’s main industry. Its proximity to Venezuela makes the country, along with neighboring Curacao, attractive to oil companies. Refinery towers can be seen along the horizon outside Oranjestad. Unlike Curacao, which houses a huge refinery right in the heart of the island, Aruba is smart to keep its refineries away from the tourist areas because the stench is putrid. What baffled me is how expensive gas is on the islands considering their oil connection. A resident explained that the kind of oil found in that area is very thick and unfit for conventional vehicles; it’s typically used in industry or for heavy machinery. Residents make so many sacrifices for the oil industry — pollution, ignoring the stench, dealing with eyesore refineries, lost agricultural land — and they get no cost benefit at the pump! What a crock!

5. Island Food>Other Food — If you visit another country, I judge you for eating at a chain restaurant. I cannot comprehend why tourists would visit Aruba and pass up the local culinary delights and instead chow down on sub-par cuisine at a place like Tony Roma’s or Taco Bell… the same goes for boring cookie-cutter establishments such as sports bars or pizza joints. While in paradise, why not eat heavenly food? If you’re craving BBQ, skip Roma’s and go to one of the local open-air BBQ establishments. If the aroma from the grill doesn’t pull you in, I’ll question if you’re human. This is one of the ways downtown Oranjestad shines: it’s chock full of local eateries with delicious bites. Dear reader, do not be a chump. Do not eat at chain restaurants unless you’re staying for a really long time and just need a quick chalupa fix on day 9 (this statement brought to you by a Taco Bell lover). I also understand the temptation to stay at an all-inclusive resort, because I’ve done it a couple times. But the food there simply will not be adventurous and representative of the tropical island’s offerings. Save the all-inclusive for an island that doesn’t have many exotic eateries. I’ve already mentioned the amazing Yemanja Woodfire Grill and The Dutch Pancakehouse in Oranjestad. Or try Madame Jeanette or Papiamento Restaurant on the west coast. Or my new favorite chill restaurant in Oranjestad, The West Deck. The ambiance, food and service there combined for a perfect, relaxing outdoor experience. Check out the decor.

This turned out to be some of the best ceviche I’ve ever let pass my lips. For the record, I’m super picky about ceviche, after having had some questionable stuff that turned my stomach. This was beyond delicious. Seriously, go to The West Deck. Go to there now.

Still not convinced? Fine, I’ll bring out the big guns. Here’s your dinner view at The West Deck, overlooking the beach, complete with sunset. You’re welcome. 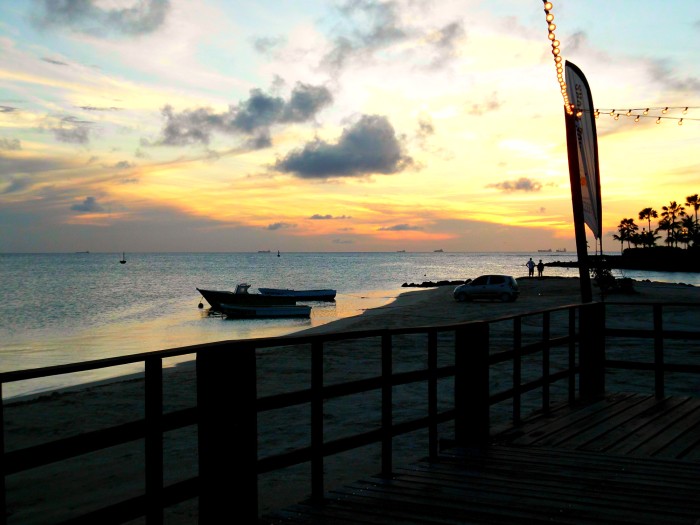 Sure, it may be easier to stop in at a pizza place where you know exactly what you’re going to get and even bad pizza is OK. But I can’t recommend enough stepping outside of the comfort zone. Local eateries in Aruba tend to feature a lot of fresh fish and seafood, so turn to that when in doubt.

6. Say What? — I knew that basically everyone in Aruba speaks some level of English, and as a Dutch island many speak that language as well. I thought Spanish would be a little more prevalent, considering Venezuela lies just 17 miles away. Although I knew the locals spoke Papiamento — a Creole-derived language that incorporates some Dutch, English and Spanish — I was surprised at just how little I could understand. I speak a decent amount of Spanish and understand even more. Heck, for several years I lived in Miami, which is as close as you come to living in Cuba without actually living there. But just when I thought I was picking up some Spanish phrases… WHAM! The native Papiamento speakers would surprise me with decidedly non-Spanish not-even-close-to-something-I-could-understand words. Although locals in Bonaire and Curacao also speak Papiamento, Aruba’s version has more of a Spanish influence. Regardless, I struggled to follow conversations. To say the residents are skilled linguistically is an understatement. This sign shows some Papiamento to give you an idea of what it’s like. But let’s be honest, much of this sign is in straight up English. It’s a beginner sign and not particularly indicative of the intricacies of Papiamento. Sorry. 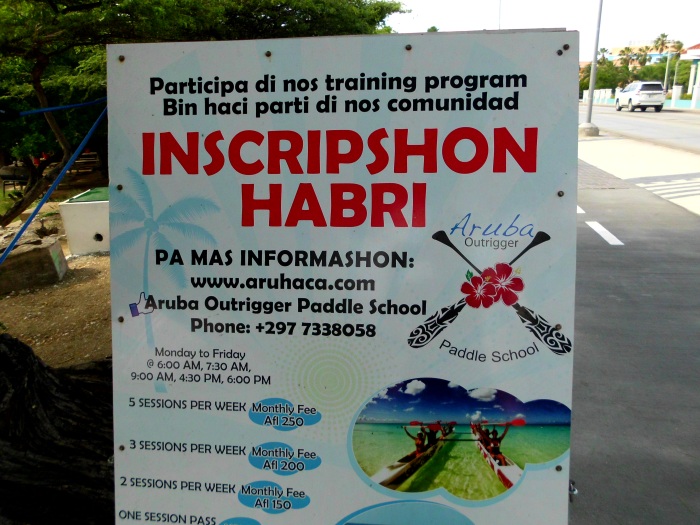 7. It’s Really Safe — I’ve been to a lot of Caribbean islands and some of them make you want to duct tape your wallet to your belly and not leave your hotel room at night. Aruba is not one of those islands in the least. The people are friendly and I felt safe at all times. Yes, Aruba had a bad year a decade ago when a young woman disappeared, but that is not in any way typical for the island (I’m not making light of the incident, just stating facts). The key is to keep your wits and not engage in dangerous activities you wouldn’t engage in at home. If you wouldn’t get drunk and high, then walk through a dark alley alone, then go to a hotel with a complete stranger, don’t do it in Aruba. The people are incredibly nice and the island is safe, but be smart.

Obviously, everyone’s experience is different and these are just some things that struck me, personally. Let me know in the comments section if you were surprised by anything while visiting Aruba.

3 thoughts on “Things They Don’t Tell You: Aruba”