“Remember that time we hiked through a rainforest on the side of a volcano in search of monkeys?”

I can’t wait to look back years from now and say those words. I imagine that then, as now, the feeling will be surreal. When you think of your everyday, conventional life and then juxtapose it with some of life’s incredible adventures, the words can sound imaginary. But they were real, and so was the adventure. I hiked through a rainforest on the side of a volcano in Costa Rica and saw monkeys. And waterfalls. And boiling mud pits.

Rincon de la Vieja, in the northern part of the country, is one of Costa Rica’s six active volcanoes. Yeah, the country has a LOT of volcanoes, both active and inactive. Because of an eruption three years ago, which produced ash and mud, certain parts of Rincon de la Vieja National Park remain cordoned off and closed to tourists. I like a good challenge and probably would have sneaked under the red tape if there had been more time. Seriously, you need a lot of time to take in all the park has to offer. 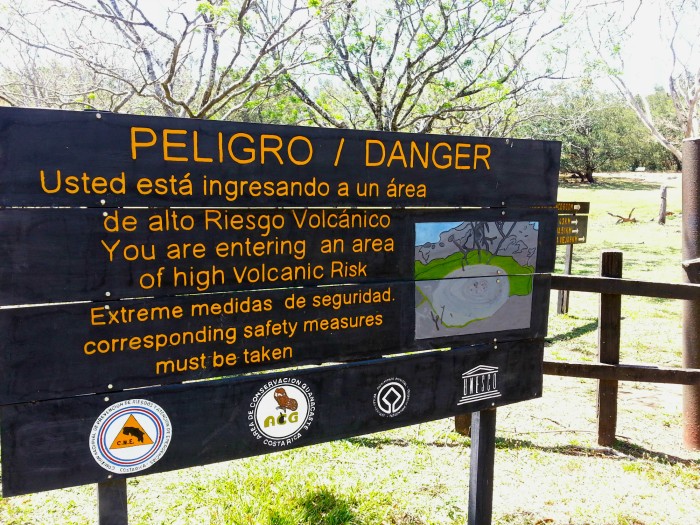 OK, now it’s time to break it down to the real. This hike is not for beginners, the infirm, the unfit, the injured, or those who dislike physical activity. This is a warning I extend to you, dear reader, as a courtesy should you wish to visit, because the park does not. On the “easy” side of the park we spotted people huffing and puffing, stepping with trepidation, and on the verge of giving up. If you are an experienced hiker and don’t mind elevation changes that include climbing over gigantic tree roots, stumps and rocks, it’s not a problem. The ranger did actually caution about the “difficult” side, which had a portion that went nearly completely vertical. This isn’t like a national park in the United States, where guides and help are everywhere, trails are pre-cut for your walking ease, and restrooms are strewn throughout. Folks, this is choose-your-own-adventure style, with the focus on adventure. Here are examples of the trails. 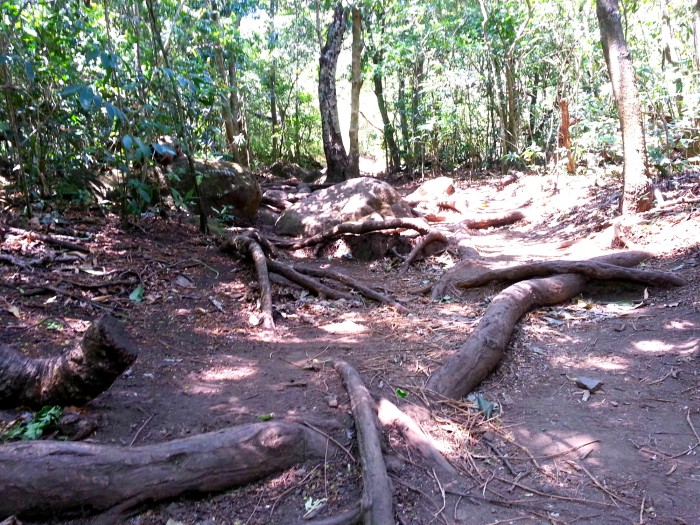 And there are rickety wooden and chain-link fence bridges. This was not my favorite.

On the more challenging trails, sometimes crossing waterways involves hopping from rock to rock, or walking along a felled tree bridging the water.

But it’s all worth it, because you get to take in amazing sights like waterfalls. Keep in mind that during dry season the waterfalls aren’t flowing as heavily as during the rainy season, but they’re still spectacular. Be sure to bring a swimming suit because you can swim in some of the pools. They’re cold, but you can still swim in them if you so desire.

An interesting part about the park is how many different habitats it contains other than just lush rainforest. Differences in altitude, rainfall and geothermal activity create different habitats, such as the tropical dry forest.

And several Costa Rican volcanoes have a “cloud forest” permanently shrouding part of the mountain.

It’s easy to get carried away with stomping along the trails, chatting with friends and forging on through the forest. But remember that those activities scare off the skittish animals who inhabit the forests. Getting away from the crowds and remaining quiet is the best way to spot animals. I briefly spotted a pair of huge peacock-like birds before they got scared and ran away. And of course, a bunch of monkeys. The monkeys would swing away whenever noisy hikers trudged through. Those stinkers are fast and the babies are especially wily. These pictures are pretty terrible, but they were the best shots I could get with the monkeys being so far up into the rainforest canopy and moving rapidly. But at least you get the idea. 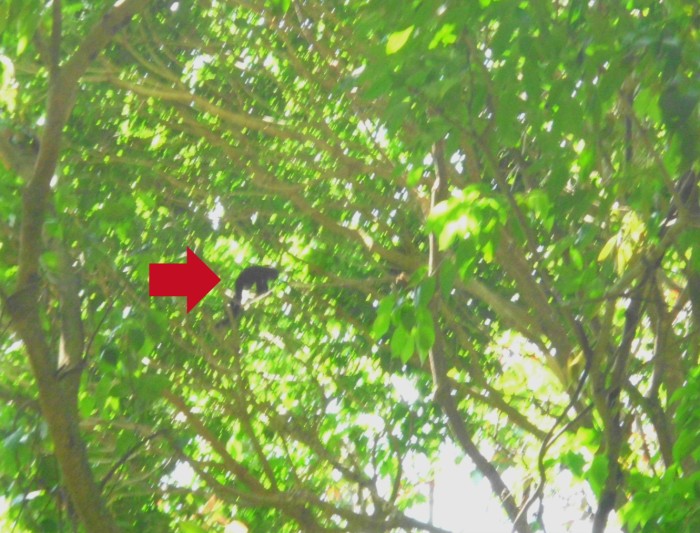 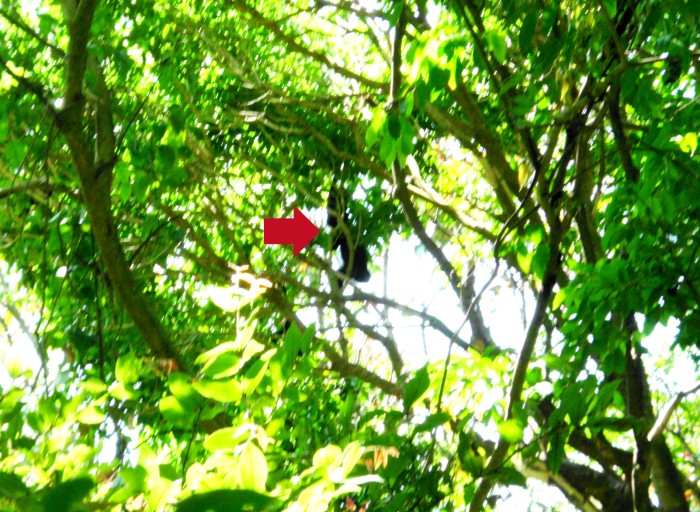 Perhaps my favorite part of the park, besides the monkeys, was all the geothermal activity. Steam vents, boiling hot springs and belching mud pits never cease to fascinate me. Walking through the warm forest and then feeling a huge burst of even hotter steam cascading across your face is amazing. Even though it’s strong and stinky, I also love the sulfur smell, reminding visitors that this gas is coming from deep within the earth. I know the sound on this video might be annoying because of the intense wind (it’s like that all the time in Guanacaste province, especially in the national park), but I didn’t mute it because I so enjoy the sounds of the mud droplets slapping against the pit, and I hope you do too!

Some tips for enjoying the park:

Visiting Rincon de la Vieja National Park and volcano was one of the highlights of the trip to Costa Rica. If you go to the country, definitely put on your adventure pants, visit the park (or a similar park/volcano) and keep quiet so you can see some silly monkeys!

2 thoughts on “A Rainforest, a Volcano and Lots of Monkeys”