“I would not feel so all alone
Everybody must get stoned.”

And get stoned they did on the annual stoner holiday, April 20. I’ve spent a lot of years giggling about 4/20, but this year really took the cake… errrr, brownie?

While in Vancouver for a work trip, I took a couple days of vacation to explore the city. I was walking around downtown and spotted hordes of people heading toward blocked off roads that had farmers market-type tents. Being a sucker for a festival, of course I walked over to see what the fuss was. Suddenly, it all came together and I remembered the date. 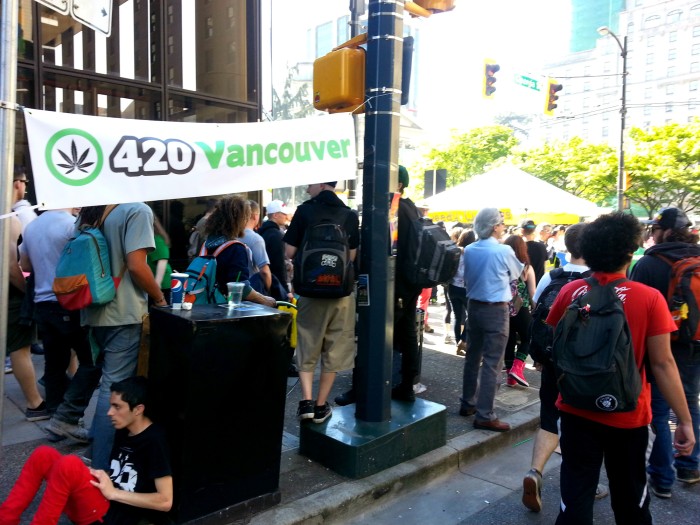 You certainly have to credit the pro-legalization folks for creativity. Take, for example, places named “Weedy Wonka’s” or “Bhudda the Hut.”

Entrepreneurs filled the streets. There were stands with items that ranged from standard pot brownies and lollipops to the very popular slices of weed cheesecake.

And there were plenty of people with makeshift signs wandering around and selling their wares. 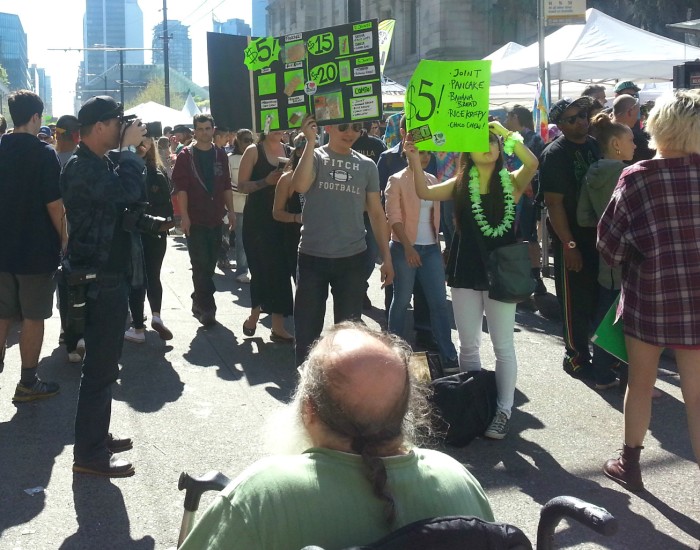 Plus, what would a festival be without music?

The previous three days I had seen medicinal marijuana shops around the city and repeatedly encountered people smoking pot in the streets, so I thought the festival was legit. It was fun watching so many diverse people — young, old, business people, slackers, and folks of all races — come together for the cause. I sauntered over to a police officer doing crowd control and asked him if this whole festival was legal. His simple response was, “No.” Huh? A festival that shuts down several blocks in a major city’s downtown isn’t legal? So he explained…

Possession of marijuana in Canada is illegal. Despite the blatant sale and smoking of pot in the streets, the police don’t do anything about it on 4/20. “Every year they do this is as a protest, so every year we turn a blind eye for one day,” the officer said. He didn’t, however, seem thrilled about the idea of spending all day doing crowd control.

I asked about medical marijuana because I had seen so many stores and he said that’s also illegal, but it’s a sticky situation because “the laws keep going back and forth so it’s tough to keep track.” To figure out exactly what he meant by that, I looked up Canada’s medicinal marijuana law, which states: “storefronts or retail outlets are not permitted.” Ah, there we go. People with a doctor’s note have to go to a licensed producer, but the officer was right that the stores I saw advertising weed are illegal.

I’m sure you’re wondering, “Well, did our lovely writer partake in the festivities?” Sorry to burst your bubble folks, but traveling on business for an organization with which I freelance means drug use is explicitly banned. Yeah, sorry for being such a square but continuing to make money means more to me than smoking up in public. Granted, with a visible haze lingering over the several blocks where the festival took place, there’s a good chance I got a little contact high just from walking among the revelers. Either way, it was fun to watch people use their rights for peaceful protest and turn it into a fun event.

I’ve lived in a lot of places, several of them very liberal large cities, but never had I seen a 4/20 festival of this scale. Well done, Vancouver, you provided a spectacular sight that I certainly hadn’t been expecting!

One thought on “Gone to Pot”