Oslo really surprised me in a lot of ways. One of the main things I noticed was residents’ sharp wit and sense of humor, plus a desire to embrace and share funny or unique aspects of Norway’s culture with visitors. Here are a few that stuck out to me.

Norway is incredibly clean and the country has a strong focus on the environment, clean energy, recycling, and sustainability. So I found it rather bizarre when I spotted this:

Those wheelbarrows and that hanging white sack are chock full of coal to load onto a steamship. Coal was (for the most part) long ago replaced by liquid fuels on ships so it seemed odd that such an environmentally friendly country would be running a coal-burning ship through its gorgeous harbor. Well, it’s a historic ship — the DS Børøysund — built in 1908, and the last functioning one of its kind in Norway. Definitely a fun, unique sight.

The Norwegian Maritime Museum is really interesting and showcased ships, the country’s seafaring history, and environmental issues. The best part, though, was the hands-on exhibit allowing visitors to try on a suit that water rescuers wear. A tad big, no? Everyone was laughing at this goofy getup and that I looked like a midget.

A lot of foods are different from what I’m used to in America, but this one in particular had me stumped. I could figure out the words jalapeno, bacon, and BBQ chicken, but I had no idea what this squeezable “ost” stuff was: 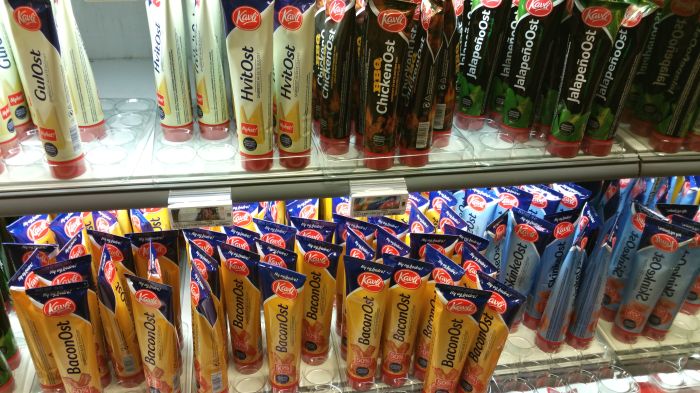 After inquiring with some friends living abroad (thanks Stef and Max!) I discovered that these tubes contain none other than… cheese. There is nothing about this that resembles anything close to cheese. And they say Americans are obsessed with processed foods! Sheesh!

Also on the food front, I found it amusing that so many restaurants currently feature American-style BBQ. I’m certainly not complaining because I love the stuff, I just found it funny considering I expected Norwegian fare to be nothing but fish!

Oslo has tons of impressive art all in all corners of the city. Of course, because I’m sure you have read every single post I’ve ever written, you know that I love to ride things. So I hopped onto a lion sculpture that was stationed in a unique spot right next to the street. Except that the bolted-in-place feline had a joke of its own for me: That sneaky bastard wasn’t bolted down well at all. In fact, it downright rocked back and forth as I climbed on top. You might note the panicked face as I clawed at its mane, trying to find a place to hold on for dear life. OK, golden Norwegian lion, you got me. But I prevailed! I didn’t fall, and that in itself is a victory for a klutz like me.

This is my favorite piece of art in the entire city:

Sometimes a city has historic, intricate art. Sometimes is has boob art. Right there next to the water, on a hill. I was in a weird mood so I kept singing “The Boobs on the Hill” to the tune of the Beatles’ “The Fool on the Hill.” Don’t judge. Apparently Oslo’s quirky atmosphere went straight to my head. But really, that just added to the good time.