Isn’t vacation grand? You’re away from work, relaxing, exploring and feasting in a destination that’s exciting simply because it’s not your home. But sometimes while enjoying an escape, you get a glimpse of real life in that place. A glimpse without the façade put on for tourists. Sometimes it’s gritty and sometimes unpleasant.

In Costa Rica, tourists splash in the surf and bask on sun-soaked beaches, while others trek into rainforests or along volcanoes for challenging hikes and glimpses of monkeys. Biologists and researchers flock to the country to study and marvel at its biodiversity. Sadly, a far more sordid scene unfolds in back rooms where tourists have arrived solely to pay for sex, and some despicable humans force others into sex slavery.

I first discovered Costa Rica’s bipolar tourism identity on the plane ride to the country. Upon filling out the customs paperwork my airline passed out to passengers, I saw this: 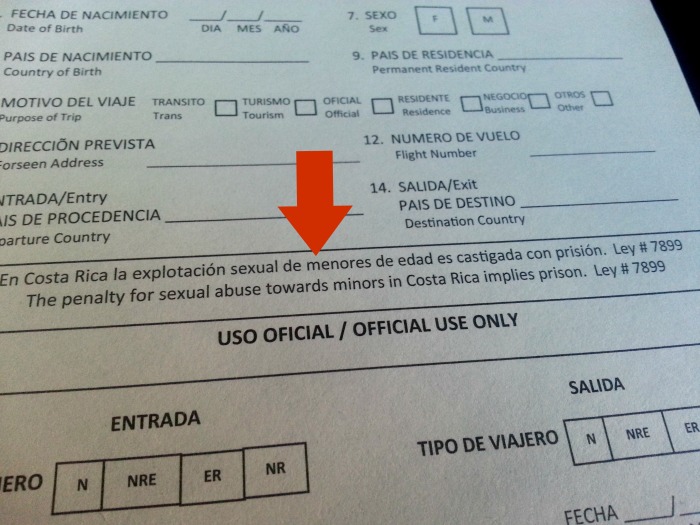 I first read the Spanish version over and over, thinking perhaps I had misunderstood. Then I compared it to the English translation, attempting to discover some small language mishap that might change the meaning. But no, this message was clear. And disturbing. The penalty for sexual abuse toward minors in Costa Rica implies prison. Costa Rica, apparently, is a breeding ground for activities that turn my stomach.

Prostitution is legal in the country and this blog post isn’t about generally agreeing or disagreeing with the practice. I do, however, find the idea of “sex tourism” disgusting, considering it strikes me as nothing more than residents of wealthier nations preying upon underprivileged residents of developing nations. Consider, for instance, that approximately 80 percent of the people who use Costa Rica as a sex tourism destination are from the United States. These people travel hundreds or thousands of miles to a foreign country just to pay for sex. And even worse, it’s often with underage providers.

Enter the human trafficking aspect. Sex tourism often is considered a gateway to more nefarious deeds like human trafficking. For those unfamiliar with the difference, sex tourism involves a prostitute (debatably) willingly engaging in and getting paid for sex by someone who came to the country for that purpose. Human trafficking involves people being forced into prostitution against their will — often involving drugs, physical abuse and kidnapping — which is nothing more than sex slavery. Even more disgusting is when it involves children.

Learning about the seedy underbelly really made me question how ignorant I had been; I didn’t realize Central America, especially a comparatively less oppressive country like Costa Rica, was so widely known for sex tourism and human trafficking. I mean, it’s so prevalent that my airline’s darn customs form included a mention. How could I have been so ignorant? It certainly made me look at the locals with a more discerning eye. Was that teenage girl really enjoying holding hands with that older-looking guy? Are some of these run-down buildings prostitution dens? Is a minor getting kidnapped right under my nose? Of course, I witnessed nothing out of the ordinary. Perpetrators go to great lengths to hide their actions, but just the thought certainly made me more aware of my surroundings. And it conjured images of the movie “Taken,” in which tourist teens were kidnapped and forced into sex slavery. It’s a sobering reminder not to let one’s guard down. Granted, Costa Rica’s problem appears to be more with forcing Latin American locals into sex slavery and not necessarily with kidnapping tourists for that purpose — many victims come from the nearby countries of Nicaragua, Colombia and the Dominican Republic — but it’s still incredibly distressing.

You could say Costa Rica is making progress to combat the issue, slowly but surely. It does not want the practice of sex tourism and human trafficking to spread; instead, officials adamantly repeat the desire to welcome tourists who visit to enjoy the country’s natural beauty. During the time I visited, the big political news was that the government passed a law requiring the age of marriage to be 18, in an attempt to cut down on older men marrying (and presumably, sometimes carrying out abusive deeds against or trafficking) young teens. The Costa Rican government also has stepped up efforts to investigate suspected human trafficking cases. But with relatively low numbers of arrests and convictions for the crimes, the measures are far from enough.

Certainly, this discovery has made me more aware of the prevalence of human trafficking. It has prompted me to do more extensive research on developing nations I visit, and to make sure the businesses I patronize do not associate with slavery practitioners, either directly or indirectly. My trip to Costa Rica still was lovely and the people were incredibly nice, but it also opened my eyes to how human nature also has an ugly side.

If you would like more information about human trafficking and how to combat it, learn more from nonprofit organizations dedicated to ending the crimes, such as Polaris Project, the International Justice Mission or ECPAT (End Child Prostitution, Child Pornography and Trafficking of Children for Sexual Purposes).